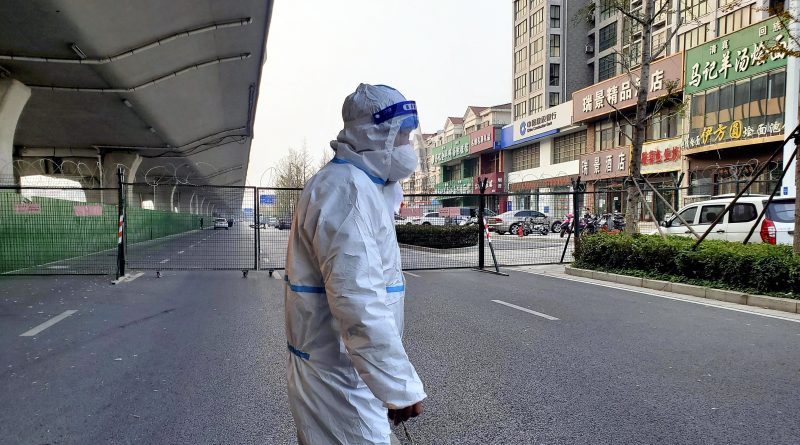 
BEIJING — Chinese authorities faced more public anger Thursday after a second child’s death was blamed on overzealous anti-virus enforcement, adding to frustration at controls that are confining millions of people to their homes and sparked fights with health workers.

The 4-month-old girl died after suffering vomiting and diarrhea while in quarantine at a hotel in the central city of Zhengzhou, according to news reports and social media posts. They said it took her father 11 hours to get help after emergency services balked at dealing with them and she finally was sent to a hospital 100 kilometers (60 miles) away.

The death came after the ruling Communist Party promised this month that people in quarantine wouldn’t be blocked from getting emergency help following an outcry over a 3-year-old boy’s death from carbon monoxide in the northwest. His father blamed health workers in the city of Lanzhou, who he said tried to stop him from taking his son to a hospital.

Internet users expressed anger at the ruling Communist Party’s “zero-COVID” strategy and demanded that officials in Zhengzhou be punished for failing to help the public.

“Once again, someone died because of excessive epidemic prevention measures,” one user wrote on the popular Sina Weibo platform. “They put their official post above everything else.”

The ruling party promised last week to ease quarantine and other restrictions under its “zero-COVID” strategy, which aims to isolate every infected person. But Chinese leaders are trying to dispel hopes the measures are about to end as other governments ease controls and try to live with the virus.

“Zero-COVID” has kept China’s infection numbers lower than those of the United States and other major countries but shuts down neighborhoods, schools and businesses for weeks at a time. Residents of some areas complain they are left without food and medicine.

A spike in infections over the past two weeks has led officials in areas across China to confine families to their cramped apartments or order people into quarantine if a single case is found in their workplace or neighborhood.

On Thursday, the government reported 23,276 new cases in areas throughout the country; 20,888 of them with no symptoms.

That included a total of 9,680 in this week’s biggest hot spot, the southern business center of Guangzhou, near Hong Kong.

The government is trying to deal with “simple and crude” over-enforcement in response to public complaints, the deputy director of the National Bureau of Disease Control, Shen Hongbing, said at a news conference.

The government has received 130,000 complaints including local officials improperly isolating visitors arriving from low-risk areas, according to Shen.

“We have sorted out the problems reported by the masses,” Shen said. He didn’t mention the girl’s death in Zhengzhou.

Local governments are being given more flexibility in possible preparation for gradual reopening of the country, but a timetable is unclear, said economists Helen Qiao, Benson Wu and Xiaoqing Pi of Bank of America in a report. They pointed to the major cities of Guangzhou, Chongqing and Shijiazhuang, which all are coping with an uptick in infections.

Read More: The Chinese Public May Finally Have Had Enough of the Government’s Zero-COVID Approach

“Their responses and reopening paths will be useful for other cities to prepare for their reopening,” they said. “No matter what measures they undertake, we do expect a short term shock on the local economic activities.”

Economists and health experts have said “zero-COVID” might stay in place for up to another year because the government needs to vaccinate millions of elderly people before it can lift curbs that keep most foreign visitors out of China.

Videos on social media this week that said they were shot in Guangzhou showed angry residents knocking over barriers set up by white-garbed health workers. The 1.8 million residents of the city’s Haizhu district were confined to their homes last week but some restrictions were lifted Monday.

A total of 1,659 cases were reported in Henan province, another hot spot where Zhengzhou is located.

Access to a Zhengzhou industrial zone that is home to the world’s biggest iPhone factory was suspended this month following outbreaks. Apple Inc. said deliveries of its new iPhone 14 model would be delayed.

An employee wearing protective gear stands in front of a closed iPhone factory in Zhengzhou City, China, on Nov. 8, 2022.

Last month, thousands of employees walked away from the factory operated by Taiwan’s Foxconn Technology Group after complaints that coworkers who fell ill received no treatment.

News reports say the ruling party has ordered “grassroots cadres” to take the place of missing workers and Foxconn is offering bonuses to others who stay. Foxconn has not responded to requests for confirmation or details.

The 4-month-old girl in Zhengzhou and her father were sent into quarantine Saturday, according to news reports and social media.

An account on social media that said it was written by the father, identified as Li Baoliang, said he started calling the emergency hotline at noon on Monday after she suffered vomiting and diarrhea. It said the hotline responded the girl wasn’t sick enough to need emergency care. The account said health workers at the quarantine site called an ambulance but the crew refused to deal with them because the father tested positive for the virus.

Read More: ‘My Daughter Was Alone in the Hospital for 5 Days.’ Chinese Parents Protest Child Separation for COVID-19

The girl finally arrived at a hospital at 11 p.m. but died despite efforts to revive her, the account said.

The account attributed to the father complained the emergency hotline acted improperly, nearby hospitals weren’t ready to help and the hospital where they ended up failed to provide “timely treatment” and gave him “seriously false” information.

“Epidemic prevention and control people, do you not have a heart?” said another posting on Sina Weibo.

The Zhengzhou city government said the incident was under investigation, according to news reports.

A report on the social media account of news outlet China News Weekly was reposted 11,000 times and received 45,000 “likes,” according to Sina Weibo.

In the capital, Beijing, access to elite Peking University was suspended Wednesday. People who visited a vegetable market in the city’s southeast where a case was found were ordered into quarantine in a hotel at their own expense. Some shopping malls and office buildings have been closed.