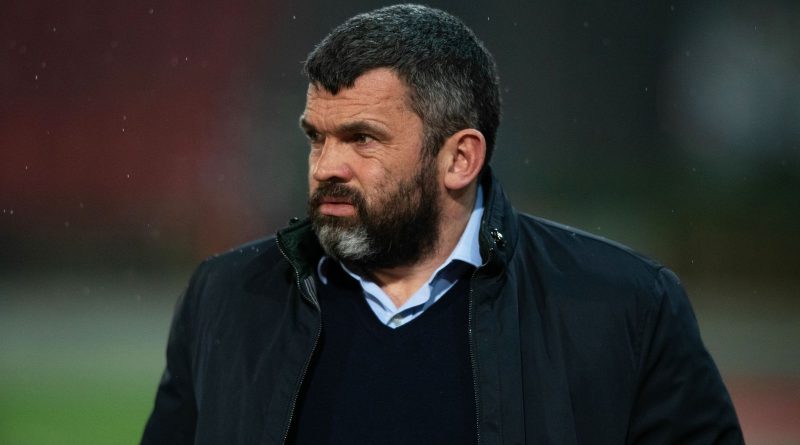 Holders St Johnstone were sensationally knocked out by fourth-tier Kelty Hearts as the Scottish Cup fourth round came to a dramatic conclusion on Saturday evening.

St Johnstone’s defence of the Scottish Cup ended in embarrassing fashion with a 1-0 defeat to part-timers Kelty Hearts.

The double cup holders were unbeaten in knockout competition last season but succumbed to a 10th successive loss as they crashed out at the first hurdle following Kallum Higginbotham’s strike in the 13th minute of extra-time.

Saints, rock bottom in the league, failed to find a response against their League Two hosts and were booed off by angry fans at the full-time whistle, ramping up the pressure on under-fire manager Callum Davidson.

The decisive breakthrough came when the home side cleared a corner and debutant Tony Gallacher allowed the ball to bounce on the halfway line before being robbed of possession by Alfredo Agyeman, who fed Higginbotham.

He coolly waited for an opening before slotting beyond Clark into the bottom corner. Forward Botti Biabi hit the bar late on for the hosts and they held on for a famous win.

Liam Boyce scored a double as Hearts eased into the fifth round of the Scottish Cup with a routine 5-0 victory over West of Scotland League side Auchinleck Talbot at Beechwood Park.

Andy Halliday, Peter Haring and Alex Cochrane were the other players on target.

The scoreline could have been more emphatic if not for some highly dubious decisions from the match officials in the first half which cost the Premiership side – and Northern Irish striker Boyce in particular – further goals.

Aberdeen eased their way into the Scottish Cup fifth round after a dominant 3-0 win over League Two side Edinburgh City.

The Premiership side were never troubled by their lower-league opponents and first-half strikes from Ryan Hedges and Christian Ramirez had the match won, before Lewis Ferguson added a third right at the death.

Manager Stephen Glass showed his intent by naming a side unchanged from a feisty 1-1 draw with Rangers in midweek and – as one might expect – it was one-way traffic from the off.

Celtic booked their place in the fifth round with a 2-1 win over Alloa which ended with a hint of nerves for the Parkhead side.

First-half goals from Greek striker Giorgos Giakoumakis and winger Liel Abada had the Hoops comfortably ahead by the interval against the League One side at the Indodrill Stadium.

Alloa striker Conor Sammon’s header reduced the deficit with 12 minutes left, but the visitors held on despite injuries to skipper Callum McGregor, Abada and Yosuke Ideguchi.

In the only all-Premiership clash of the round, the decisive incident came after 16 minutes following County defender Declan Drysdale’s foul on Bruce Anderson inside the area.

County pushed for an equaliser in the second half but Alex Samuel and Dominic Samuel failed to find the target from good openings, with Livi goalkeeper Max Stryjek also denying Blair Spittal as they successfully repelled the visitors’ efforts to equalise.

Leigh Griffiths scored from the penalty spot as Dundee progressed into the fifth round with a 1-0 victory at League One Dumbarton.

Dundee rarely threatened as they found it hard to break through a resolute Dumbarton defence, but the Dark Blues did enough to snap a six-game losing streak.

Senior players Griffiths, Charlie Adam, Paul McMullan, Adam Legzdins and Liam Fontaine were all initially left out as James McPake’s side progressed at The Rock.

A moment of brilliance from Dylan Levitt saw Dundee United through to the last 16 following an extra-time win against Kilmarnock.

The on-loan Manchester United midfielder produced an impressive piece of skill and an emphatic finish to earn United a 2-1 victory at Rugby Park.

Marc McNulty had put United into an early lead, but Rory McKenzie levelled and the Championship side had the better of the chances in normal time as the 5,380 crowd got their full money’s worth in an entertaining cup tie.

Liam Donnelly’s late extra-time strike sealed a dramatic Scottish Cup comeback for Motherwell as they came from behind to defeat Championship side Morton.

The two sides could not be separated after a closely contested 90 minutes and another half-hour was required to find a winner.

Morton broke the deadlock with the last kick of the first period of extra time as Robbie Muirhead’s curling effort nestled into the far corner but the Steelmen showed their Premiership class to complete a dramatic late turnaround in North Lanarkshire via Kevin van Veen and Donnelly.

St Mirren booked their place in the fifth round of the Scottish Cup with a comfortable 2-0 win at Ayr.

First-half goals from Kyle McAllister and Greg Kiltie secured the victory for Jim Goodwin’s side, while the Championship club’s best chance came from a late Tomi Adeloye header that went wide.

Elsewhere, sixth-tier West of Scotland Football League side Clydebank were denied in the cruellest fashion as Scottish League Two Annan Athletic scored in the 119th and 123rd minutes to snatch a desperately dramatic 4-3 win.

The Saturday results come after Hibernian beat Cove Rangers 1-0 on Thursday and Rangers eased past Stirling Albion 4-0 on Friday.

Motherwell and Aberdeen, Hearts and Livingston will contest all-Scottish Premiership ties, while Kelty Hearts’ reward for beating top-tier St Johnstone is a trip to Paisley to face Premiership side St Mirren. The ties will be played across the weekend of February 12.