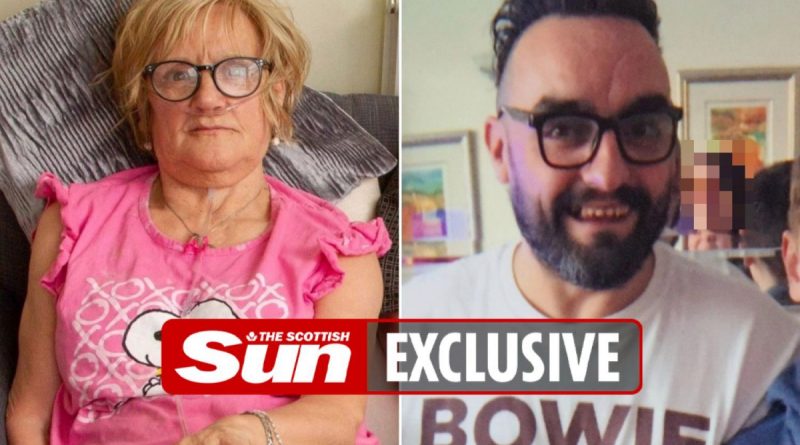 
A SERIOUSLY ill mum pleaded for her son to be freed from his jail term for threatening a thief with a fake gun.

Patricia Mitchell, 71, fears the agony of Alan, 45, being inside may kill her.

The dad of two wept as he got 13 months for pulling the BB gun on Joseph Gannon, who nicked his £1,000 bike.

Patricia, who suffers COPD and bronchiectasis, has had two cardiac arrests since her boy’s ordeal began last year.

The ex-nurse, of Aberdeen, said: “I’m worried this stress will finish me off for good.

“Alan is so soft and has never been in trouble. He doesn’t deserve to be in jail.

“The way things are going I might not be here to see him when he gets out.”

The great gran said her lad sobs in phone calls.

Alan confronted addict Gannon after he was clocked on CCTV swiping his prized bike outside an Aberdeen shop last August.

It’s claimed Gannon followed him home to his parents’ pad in the city and threatened to come in.

Alan’s dad Brian, 71, said his son used the gun as he feared the lout might pass on Covid to his mum.

Former psychiatric nurse Alan cares for his parents and can’t work due to a brain injury from a road crash.

The family is launching a legal bid and petition to free him after he admitted threatening behaviour at the city’s sheriff court last month.

Scots Tory MSP Russell Findlay said there were “concerns about the suitability of imprisonment which deprived elderly parents of their carer”.

Gannon, 32, got just four months’ jail time for the theft.

A Judicial Office for Scotland spokesman said sheriffs “carefully consider” both sides of every court case.

We pay for your stories and videos! Do you have a story or video for The Scottish Sun? Email us at scottishsundigital@news.co.uk or call 0141 420 5300