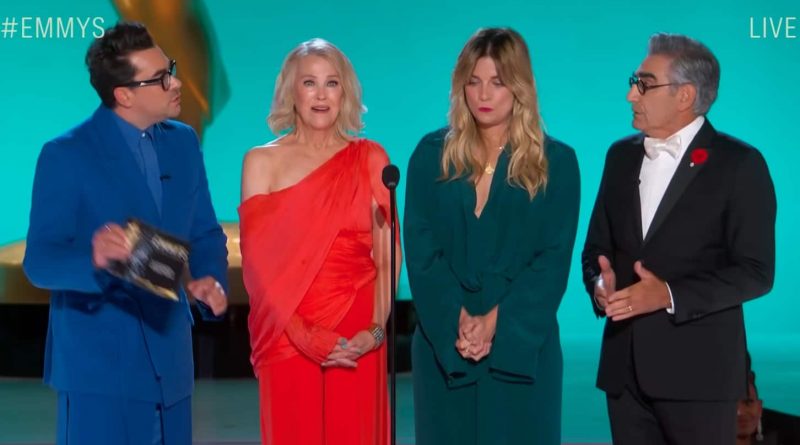 The cast of Schitt’s Creek stole the Emmys. (YouTube)

The cast of Schitt’s Creek reunited at the Emmy Awards, and they single-handedly stole the show with a hilarious teleprompter ‘misshap’.

After a historic clean sweep of the comedy categories at last year’s ceremony, the cast of Schitt’s Creek reunited onstage at the 2021 Emmys on Sunday (19 September).

Eugene Levy, Dan Levy, Catherine O’Hara and Annie Murphy were greeted with rancorous applause from attendees, with some people even giving them a standing ovation, before proving that their comedy chops are as sharp as ever with a hilarious teleprompter bit.

“Thank you so much. There’s nothing on the prompter,” Dan declared.

The actors stared at the crowd in faux-shock before Annie leaned in towards the microphone and asked for a “tech guy” to assist them.

“Maybe we should just open the envelope?” Catherine asked.

But Dan rejected the idea. The on-screen family stood around awkwardly for their cue before Eugene suggested that the Emmy Awards’ producers could have been “doing this on purpose”.

The real-life father and son duo then argued over whether it was all a plan to “purposely embarrass us” on live television. Dan asked why his father would even suggest a thing as Eugene sheepishly tried to deflect the questions.

Annie then asked why Eugene’s “face” was “being weird”, and Catherine straight out asked him if he did something.

“No, I just, I may have passed the writer’s room this morning and asked them to lift the dialogue a little bit,” Eugene admitted.

“You casually told a room of comedy writers to ‘lift’ your dialogue?” Dan asked incredulously. “‘Lift’ was the word that you used?”

Eugene said he just wanted them to “tighten” up their dialogue, and Catherine promptly asked what the writers’ response was.

Fans took to social media to share their excitement over the Schitt’s Creek reunion, declaring that the stars deserved another Emmy.

Schitt’s Creek should get an Emmy for that Emmy bit. #Emmys pic.twitter.com/tZUjkXTsKq

the Emmy for best presenting bit goes to the cast of Schitt’s creek #Emmys pic.twitter.com/409imLuoIq

This year, the Schitt’s Creek stars passed their Emmys torch down to Hacks for Best Writing in a Comedy Series.

Dan shared that the “prompter is back” before the group handed out the award for Best Directing in a Comedy Series to Hacks’ Lucia Aniello.