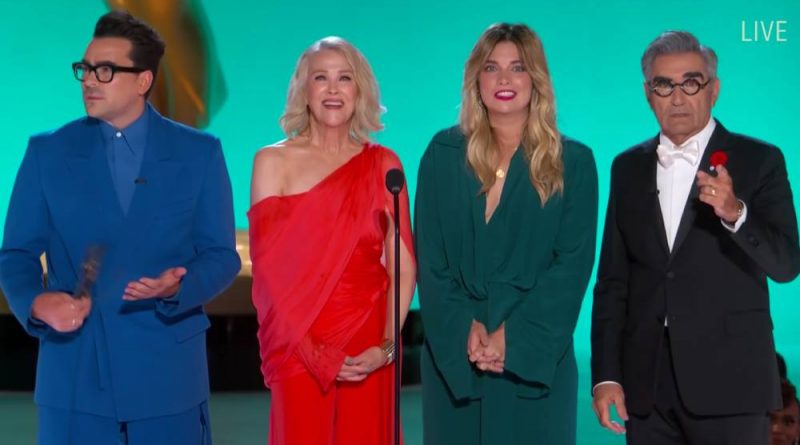 Schitt’s Creek fans will be able to experience another Rose family reunion after their stellar appearance at the Emmys, according to Eugene Levy. (YouTube/Television Academy)

Schitt’s Creek fans rejoice! There will be another Rose family reunion after the cast stole the show at the Emmys, according to Eugene Levy.

A year after the show ended, the Schitt’s Creek cast were responsible for one of the Emmy Awards’ funniest moments on Sunday (19 September).

Eugene Levy, Dan Levy, Catherine O’Hara and Annie Murphy reunited on stage in a surprise skit that had the internet in stitches, but also left fans wondering when they could next see the Rose family together again.

Well, worry no longer because Eugene has come through with the answer. The beloved actor, who played the patriarch of the Rose family, announced that he and his son Dan (David Rose) would be taking the stage once again for a new live event.

“How do you follow a fun Rose family reunion at the Emmys?? With this!” He wrote, announcing the event for their new Schitt’s Creek book.

How do you follow a fun Rose family reunion at the Emmys?? With this! The event will also be live streamed for those fans who cannot attend in person. See you on the 25th!! https://t.co/qEUTzjkEzk

The father-son duo initially shared they would be releasing an official Schitt’s Creek book titled Best Wishes, Warmest Regards back in August. The book is set to be hit book stores and go on sale online on 26 October.

Eugene and Dan Levy will celebrate the book’s launch with an event at New York City’s Beacon Theatre the night before the on-sale date. Eugene assured fans worldwide on Twitter the event will be live-streamed online “for those fans who cannot attend in person” – so everyone can bask in the Levys’ glory.

It’s currently unknown if Catherine O’Hara or Annie Murphy will be appearing at the book event, but don’t put it past them to make a surprise guest appearance.

In August, Dan and Eugene announced they would be cancelling the highly-anticipated Schitt’s Creek North American farewell tour over concerns increasing numbers of COVID-19 cases this year.

The pair shared a statement on Instagram apologising for missing out on the events. But they said the “state and local mandates vary too widely” for them to feel safe travelling to meet fans.

Fans can get their hands on tickets for the book’s launch event from 22 September via Ticketmaster.