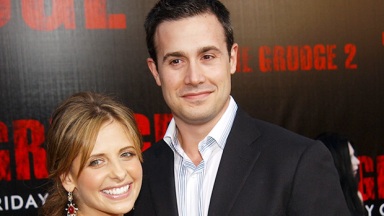 
While celebrating her 20th wedding anniversary to husband Freddie Prinze Jr, 46, on September 1, Sarah Michelle Gellar, 45, took the opportunity to call out someone who doubted the couple’s success. Sarah shared a throwback photo of the lovebirds from their 2002 wedding, followed by an adorable recent snapshot of them together, on her Instagram Stories. Then, the Buffy the Vampire Slayer alum savagely resurfaced a conversation between her husband and Howard Stern, 68, from 2001, where Howard expressed doubt that the couple would make it past 10 years of marriage.

I’ve never been more obsessed with a celebrity move than Sarah Michelle Gellar posting this on her insta story pic.twitter.com/fX228oe9zU

On that episode of The Howard Stern Show, the outspoken radio host said to Freddie, “So you will marry Sarah Michelle Gellar even though you know that it won’t last?” Freddie, who met his future wife on the set of I Know What You Did Last Summer in the late 1990s, insisted that their relationship would “absolutely” last. Howard was so doubtful that he had a major proposition to Freddie. “I wanna make a bet with you: In about 10 years you’re gonna hunt me down and go, ‘Howard, I owe you money,’ ” he said to the actor. We know who lost that bet!

Sarah didn’t just post the screenshots of the Freddie and Howard’s conversation on her wedding anniversary. She also wrote her own message to Howard about the bet. “@SternShow What do you think?!?! I think you owe us,” the Cruel Intentions star wrote. Sarah also shared a photo of her and Freddie on their wedding day to her Instagram feed, writing, “20 💫.”

Along with two decades of a blissful marriage, Sarah and Freddie also have two children, daughter Charlotte Grace Prinze, 12, and Rocky James Prinze, 10. The Scooby-Doo co-stars like to vacation in Maui with their kids, though they never post Charlotte and Rocky’s faces on social media. Last December, Freddie opened up on what makes his and Sarah’s marriage so successful.

“I think it’s more about the person you’re with and the path that you travel on,” Freddie told HollywoodLife during an EXCLUSIVE interview. “Do you travel it together? And if you do take separate paths, do those paths lead back to the same one that you started on, or do they take you further and further apart? Sarah and I have always been fortunate enough and thoughtful enough to stay on the same path, even when roads are going to take us away.”

Mila Kunis & Ashton Kutcher: The Story Of Their Relationship From ’That ‘70s Show’ To Now