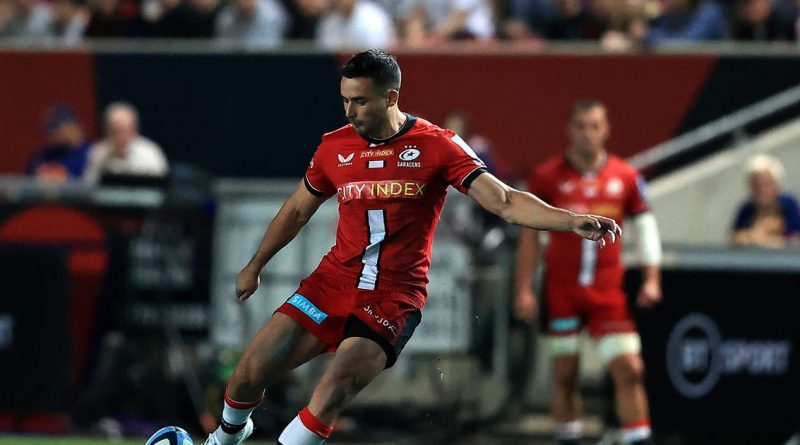 
The 2021/22 Premiership season kicked off in tetchy fashion as Bristol Bears and Saracens opened the campaign on Friday, and it was the promoted party who came out on top in their top-flight return

The nerves were evident for both teams as Saracens beat Bristol Bears 26-9 in their return to the Premiership on Friday.

Alex Lozowski scored 21 points from the tee and set up the only try of the game as Saracens beat last season’s table-toppers, reminding the rest of the first tier they mean business in their comeback.

Despite being two titans of English rugby who each enter this campaign among the favourites for the title, the pressure appeared to tell in a kick-happy outing at Ashton Gate.

Mark McCall’s men start the new campaign without a complement of their British and Irish Lions, with the likes of Owen Farrell and Maro Itoje still a few weeks from completing their stand-down protocols.

But Bristol were also coping with several major names absent, including Semi Radradra, who has been delayed in his return after winning Sevens gold with Fiji at the 2020 Tokyo Olympics.

Friday’s fixture could have used his swashbuckling influence, too, considering the kick-fest that took root in the first half of Friday’s curtain raiser.

Fans at Ashton Gate have grown accustomed to watching some of the best attacking rugby on the continent in recent years, but the first half in particular fell painfully short of expectations.

Former New Zealand international Charles Piutau was one who refused to buy into the game’s kicking pattern and got fans on their feet, but Sarries grew more astute in playing to the tactics required on the night.

Standing in for Farrell as Saracens’ No. 10, Lozowski exchanged penalties with opposite number Callum Sheedy in the first half, where not giving up territory took precedence over entertainment during a frantic first 40.

Wales fly-half Sheedy impressed from the tee and converted three penalties to put the hosts in a 9-3 lead early on, but Lozowski showed the necessary nerve to kick his side level going in at the interval.

Piutau took it upon himself to spark the game into life on the 25-minute mark, shimmying inside his own 22’ to inspire a move that almost resulted in a length-of-the-field try.

Dynamic hooker Harry Thacker helped keep ball alive before Saracens stubbed out the attack on their own five-metre line, but the passage served as a reminder of what the Bears offer at their free-flowing best.

That proved to be a rare occurrence as Bristol struggled to assert their usual running game, made all the more difficult by a penalty count that steadily rose against the home side.

Bristol coach Pat Lam will have been pleased with how his side started, but it’s how one finishes that decides results, and in that regard Saracens began to turn the screw in the second half.

The high-ball blueprint eventually paid dividends for Saracens, too, as they won several early penalties from the kick chase, and Lozowski slotted four second-half penalties without reply for the guests to race into a 21-9 lead.

Things went from bad to worse for Bristol when Lozowski grubbered through for Alex Lewington to slide over in the corner after 70 minutes, ensuring those in attendance would witness at least one try in the season-opener.

Alex Lewington scored the only try of the game

Bristol No. 8 Nathan Hughes almost doubled the try count with a barge over at the opposite end moments later, but a knock-on a metre out saw those hopes agonisingly extinguished.

The Premiership season continues with four more fixtures on Saturday, while reigning champions Harlequins begin their 2021/22 campaign away to Newcastle Falcons on Sunday.

Saracens won’t welcome the bulk of their Lions stars back until October 18 at the earliest, although Farrell may not be missed if McCall can rely on Lozowski to perform with such aplomb in the coming weeks.