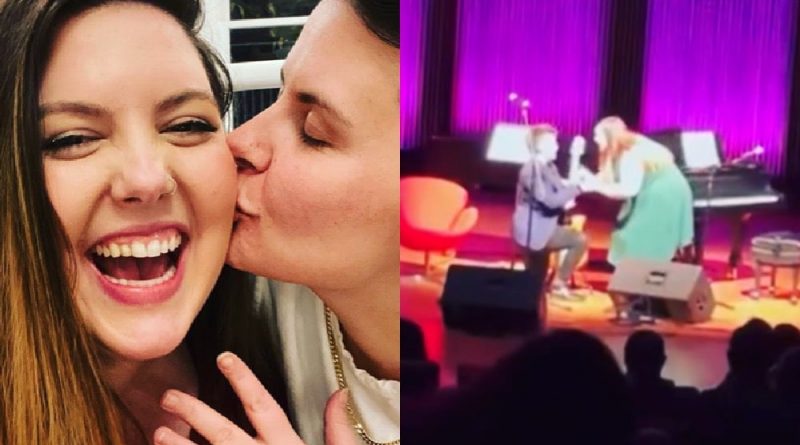 Lambert, 32, announced the engagement on Instagram with a photo of the happy couple along with a video of Hermansen proposing on stage in front of a cheering crowd.

“I’ve dreamt of this moment my whole life. We’re gonna get married in front of God and everybody!” Lambert wrote on Instagram.

“I love you Wyatt Paige Hermansen!!!”

The couple, who co-host the self described “super-gay” podcast The Manic Episodes, were doing a live event at when Hermansen, an English professor, popped the question.

Lambert could be heard on stage saying: “Oh my God! Are you serious?” before saying yes to the proposal and hugging Hermansen.

Mary Lambert is best known for the marriage equality anthem “Same Love”, a collaboration with Macklemore and Ryan Lewis released in 2012 that was nominated for Best Song at the Grammys.

During an unforgettable performance of “Same Love” at the Grammy Awards, Queen Latifah read marriage vows for 33 couples on stage.

The song, which champions LGBT+ rights and was often played by supporters of legalising same-sex marriage in the United States, was involved in controversy after it was censored by radio stations in Australia.

Ahead of the legalisation of same-sex marriage in Australia, Macklemore and Lambert performed the song at a sports event, with two radio stations choosing to cut live feeds of the performance when Same Love began.

Former prime minister Tony Abbott, an opponent of same-sex marriage in the country, led calls for the performance to be cancelled, claiming that the track would be perceived as supporting same-sex marriage, which was then legalised in December 2017.

Lambert and Macklemore have clearly stayed in touch since recording together, with the American rapper leaving two heart emojis and a raised hands emoji on the happy couple’s Instagram announcement.