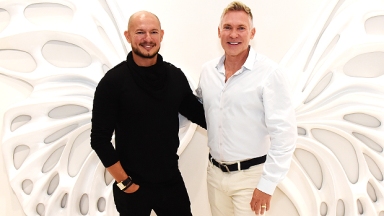 
Sam Champion, 61, is an award-winning journalist and weather anchor, who is best known for his longtime career with ABC’s WABC-TV and Good Morning America. The successful reporter is also a devoted partner to his husband, Rubem Robierb, 45. The handsome couple can often be seen spending quality time together traveling and living it up in New York City where they live. Get to know more about Sam and Rubem below!

Sam & Rubem Have Been Married For 10 Years

Rubem and Sam got married 10 years ago in 2012. They first got engaged that October and told The New York Times about their official wedding plans. “We’re getting married New Year’s Eve in Miami,” Sam told the outlet at the time. And of course, they kept their promise! Sam and Rubem first got married in New York City, and then they hosted a New Year’s Eve wedding bash in Miami Beach. Their Miami wedding was a full-circle moment for the adorable pair since that is where they first met in 2009, according to The US Sun. Sam and his artist husband met in the beach city of Florida during New Year’s Eve just three years before getting married in the same place!

Rubem Is An Artist

Although Sam has a very successful career in TV journalism, his partner has an inspiring career as well. Rubem is a successful artist that works as a photographer and a sculptor. His artwork often has important political messages about climate change and LGBT rights. Rubem can often be seen working on his beautiful artworks on his official Instagram where he has over 22K followers.

The creative man shared a video on Instagram on July 4, 2022, and it shows him painting a beautiful butterfly. He captioned the post, “#contemporaryart #energy #manifestation #multiverse.” And working on his art is not something he does alone! Sam can often be seen giving a helping hand from time to time. On Aug. 2, 2022, Rubem shared a video of Sam helping out with a life-size butterfly sculpture with his husband. Rubem captioned the adorable video, “Who has the most supportive husband? @samchampion.”

When Sam isn’t reporting on the weather and Rubem is not working on his art, the power duo can often be seen traveling the world together. Both of their Instagrams are filled with many wonderful memories of their adventurous trips. In August 2022, the loving couple took a trip to Rio de Janeiro, a beach city in Brazil. Sam shared a video of the holiday on his Instagram, and admired the beach life. He wrote, “One of the beautiful things about #Rio is the design of the #beachlife ! Wide views, wide bike paths, wide running paths along a wide beach!! It’s planned for people to enjoy #allday #bringcoffee #bomdia #praia #gostoso.” No matter what these two are up to, one can be sure it is always filled with art and adventure!