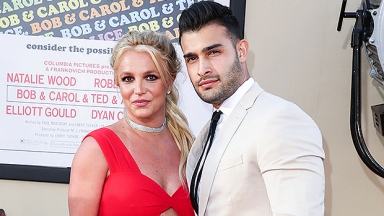 
Britney Spears‘ husband Sam Asghari is not at all happy with her ex-husband Kevin Federline. On Sept. 4, 60 Minutes in Australia aired a recent ITV interview with Kevin, 44, and their son Jayden, 15, in which Jayden blasted his mom for her risky Instagram photos and defended his grandfather, Jamie Spears, 70, for placing Britney in a 13-year-conservatorship. Although Britney addressed Jayden directly on her Instagram after it aired, HollywoodLife has EXCLUSIVELY learned that Sam doesn’t think that the teen is completely at fault. In fact, our sources said that he blames Kevin for putting Jayden on TV — and thinks he owes Britney a massive apology!

“Sam thinks it was a low blow for Kevin to put Jayden on TV and he feels he should apologize and make it right,” a source told us. “Britney loves those boys so much and has done nothing but provide for them and for Kevin too. It’s shocking to Sam that Kevin would have Jayden go on TV. It is very hurtful and Sam is so angry that Kevin has hurt his wife this way.” As fans know, Britney’s other son, Sean Federline,16, did not conduct an interview, nor did he appear in it.

“The whole situation is so painful for Britney, and as her husband, Sam is doing everything he can think of to boost Britney’s spirits right now,” the source said, adding, “It’s not easy because as she’s said openly, she was already crying every day over this before this interview [with Jayden] came out. Now she’s in even more pain and Sam tries to reassure her that her boys will come to their senses when they are older, but there’s only so far that goes because she’s absolutely heartbroken.”

As previously reported, Jayden’s interview aired in the same segment as Kevin’s interview with reporter Daphne Barak. Portions of Kevin’s interview aired in the UK before the network decided to pull the remainder of it after experiencing a massive backlash from fans. According to a source, Britney found out that her son Jayden had done the interview just “days” before it aired! In the on-air interview, Jayden spoke out about his mom’s risque Instagram photos and said, “It’s like almost as if she has to put something on Instagram to get attention. This has gone on for years and years and years, and there’s a high chance that this is never going to really stop, but I’m hoping for me, maybe she will.”

A second source agreed that Kevin definitely needs to say that he is sorry. “Sam feels like Kevin owes Britney an apology, to say the least. He knows how much she loves her sons.  Ever since their wedding, it has just been one thing after another,” the second source said, adding, “Sam wants nothing more than for his wife to be happy and put all of this behind her. He feels that this was so out of line and disrespectful and, yes, he does blame Kevin for dragging Jayden into this mess.” As HollywoodLife reported, Jayden and Sean did not attend their mother’s wedding to Sam on June 9, 2022. In the interview, Kevin said that the boys have not seen Britney “in months.”