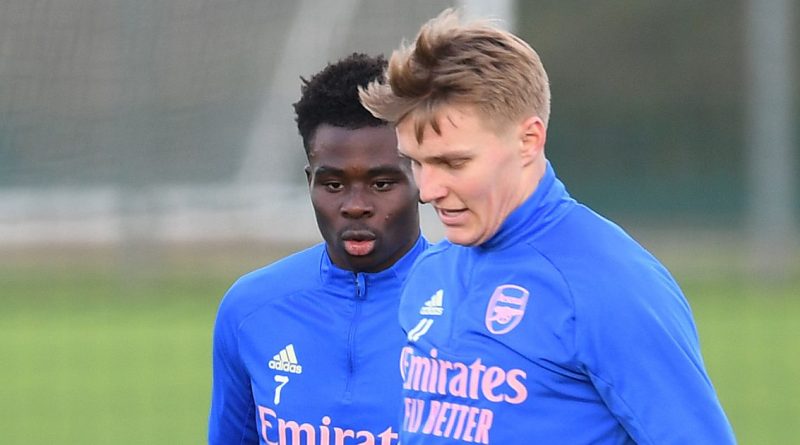 Saka receives praise from Trippier after starring for England

Martin Odegaard’s impressive performance for Norway against Latvia will have given Mikel Arteta some food for thought as Arsenal return from the international break.

The Gunners are in desperate need of a response against Norwich after starting the Premier League season with three defeats from their first three matches.

One of the issues that the Gunners are facing is how to get the best out of Odegaard and Emile Smith Rowe with the former the preferred option in the no.10 role as Arteta has deployed a 4-2-3-1 formation in the early stages of the campaign.

But there might be a solution as Odegaard was deployed on the right-hand side in Norway’s 2-0 win over the Latvians in their World Cup qualifier.

Should Mikel Arteta make changes for Arsenal’s clash with Norwich? Comment below

The playmaker registered three key passes, five successful dribbles with several crosses and through balls in the attacking third.

Odegaard and Mohamed Elyounoussi played on either side of Erling Haaland as ‘inverted wingers’, drifting centrally, allowing the full-backs to bomb ahead of them.

This set-up potentially gives Arteta another option as he looks to solve his side’s woes in front of goal this term, but Odegaard’s positional change would require a system tweak, which would alter the role of Bukayo Saka as a result.

Smith Rowe would operate on the opposite side of Odegaard, with Pierre Emerick Aubameyang through the middle, giving both players the freedom to create in those central areas, instead of having one fixed no.10.

But this would mean Saka, who is normally used as a left-winger, would have to drop back ever so slightly, almost as a full-back.

Arteta has already hinted that this is a route he could go down as he experimented with a back-five formation versus Brentford in a closed-doors friendly during the international break that saw the Gunners secure a 4-0 victory.

Martin Odegaard in action for Arsenal

Former Arsenal player Paul Merson previously criticised the north London club’s signing of Odegaard as he believes it will stunt the growth of Smith Rowe.

He told the Daily Star: “What sort of message does signing Odegaard send to Emile Smith Rowe?”

“I can see why he held out signing a new contract. When Odegaard came on loan he ended up playing out on the wing. But Emile Smith Rowe is a No 10. He’s the future at Arsenal. He came through the ranks and he makes things happen.

“He is the one who is going to suffer most from them buying Odegaard. What really is the difference between them anyway? I think they are too similar. But I know who’s not getting picked if it starts going wrong and it won’t be the £30m new signing…

“I know they both played in the same team last season but it was a problem. Smith Rowe didn’t look comfortable on the wing. It’s like making a centre-back play at right-back. However hard you try, sooner or later you’re going to get dropped.”