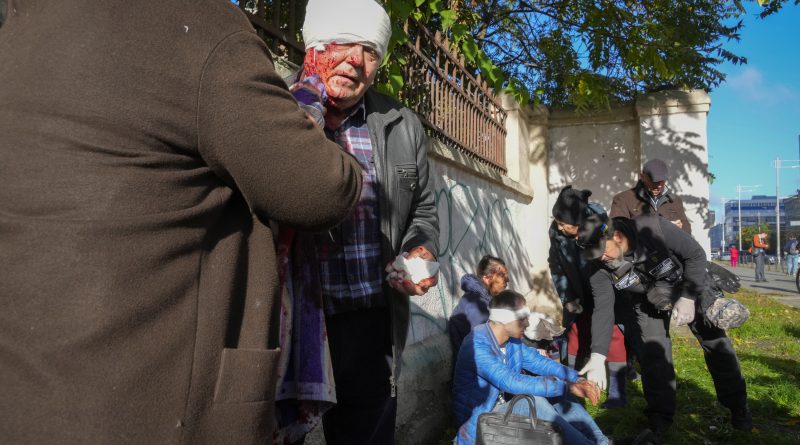 
KYIV, Ukraine — Explosions on Monday rocked multiple cities across Ukraine, including missile strikes on the capital Kyiv for the first time in months, hours after Russian President Vladimir Putin called a Saturday explosion on the huge bridge connecting Russia to its annexed territory of Crimea a “terrorist act” masterminded by Ukrainian special services.

At least eight people were killed and 24 were injured in just one of the Kyiv strikes, according to preliminary information, said Rostyslav Smirnov, an adviser to the Ukrainian ministry of internal affairs.

Blasts were reported in the city’s Shevchenko district, a large area in the center of Kyiv that includes the historic old town as well as several government offices, Mayor Vitali Klitschko said.

Lesia Vasylenko, a member of Ukraine’s parliament, posted a photo on Twitter showing that at least one explosion occurred near the main building of the Kyiv National University in central Kyiv.

After the first early morning strikes in Kyiv, more loud explosions were heard later in the morning in an intensification of Russia’s attack that could spell a major escalation in the war.

Associated Press journalists in the center of Dnipro city saw the bodies of multiple people killed at an industrial site on the city’s outskirts. Windows in the area had been blown out and glass littered the street.

Read More: Russia Wants to Lock Ukraine Back in the Soviet Cellar

Ukrainian media also reported explosions in a number of other locations, including the western city of Lviv that has been a refuge for many people fleeing the fighting in the east, as well as Kharkiv, Ternopil, Khmelnytskyi, Zhytomyr and Kropyvnytskyi.

The multiple strikes came a few hours before Russian President Vladimir Putin was due to hold a meeting with his security council, as Moscow’s war in Ukraine approaches its eight-month milestone and the Kremlin reels from humiliating battlefield setbacks in areas it is trying to annex amid a Ukrainian counteroffensive in recent weeks.

A day earlier, Putin had called the attack on the Kerch Bridge to Crimea a terrorist act carried out by Ukrainian special services. In a meeting Sunday with the chairman of Russia’s Investigative Committee, Putin said “there’s no doubt it was a terrorist act directed at the destruction of critically important civilian infrastructure.”

The Kerch Bridge is important to Russia strategically, as a military supply line to its forces in Ukraine, and symbolically, as an emblem of its claims on Crimea. No one has claimed responsibility for damaging the 12-mile (19-kilometer) -long bridge, the longest in Europe.

Amid the onslaught, Ukrainian President Volodymyr Zelenskyy said on his Telegram account that Russia is “trying to destroy us and wipe us off the face of the earth.”

“Please do not leave (bomb) shelters,” he wrote. “Let’s hold on and be strong.”

Following the strikes on Kyiv, several residents were seen on the streets with blood on their clothes and hands. A young man wearing a blue jacket sat on the ground as a medic wrapped a bandage around his head. A woman with bandages wrapped around her head had blood all over the front of her blouse. Several cars were also damaged or completely destroyed.