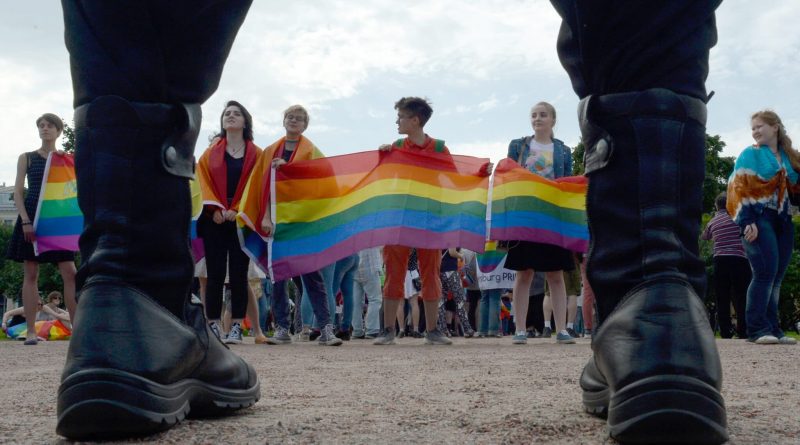 Police presence at a Pride parade in Saint Petersburg, Russia, in 2017 (AFP/Olga Maltseva/Getty)

A prominent Russian LGBT+ group working to evacuate queer people from Chechnya has been added to the Russian Ministry of Justice’s list of “foreign agents”.

Formed in 2006, the Russian LGBT Network exposed the horrific Chechen “gay purge” to the international community. It has helped over 150 queer people flee the region since 2017 and relocate them to safer regions in and outside Russia.

The organisation has 17 branches across the country and continues to compile reports on the ongoing persecution of LGBT+ people in Chechnya, which the local government persistently denies is happening.

On Monday (8 November) Russian authorities labelled the LGBT Network and five lawyers from the activist group Team 29 as “foreign agents”, a designation that implies additional government scrutiny. Once registered, NGOs are subject to additional audits and forced to mark all official statements with a disclosure that it’s being given by a “foreign agent”.

The LGBT Network rejected this categorisation and said it would be appealing the decision in court.

“At the moment we are not aware as to what was the reason for recognising us as a foreign agent,” the group’s council said in a statement.

“Russian LGBT Network does not agree with such a status. We are not involved in any political activity, we provide legal, psychological help, protect the rights of LGBTQ+ community.

The news was strongly condemned by Natalia Zviagina, Amnesty International’s Moscow office director, who said it was “beyond shameful”.

“The justice ministry’s decision reveals that committed, principled lawyers defending the rights of people targeted in politically motivated cases and frontline LGBTI rights defenders are unwelcome and ‘foreign’ in Putin’s Russia,” she said.

“LGBT Network has exposed heinous crimes against gay men in Chechnya and helped evacuate people at risk to safety where they can speak about these atrocities. Now LGBT Network is, itself, a victim of the persecution that is being increasingly targeted at all human rights defenders – openly, viciously and cynically.

“The authorities cite the need to protect ‘national interests’ and resist ‘foreign influence’ in their incessant destruction of Russia’s civil society. But what’s really in the national interest is to protect, uphold and respect all human rights for everyone.

“These reprisals against human rights defenders and civil society organisations must stop, and the ‘foreign agents’ and ‘undesirable organisations’ laws must be repealed immediately.”