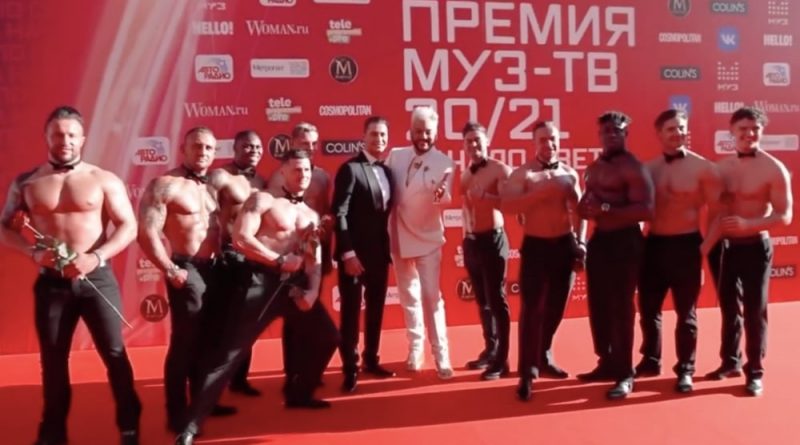 A Russian television channel has been fined for so-called “gay propaganda” after its guests wore gender-flipping garbs.

The Muz-TV awards, one of the country’s top showbiz events, ruffled Russian officials’ feathers when two singers pulled up in a white convertible with dozens of buff, shirtless men trailing them.

A male beauty blogger at one point wore a voluminous black gown while a TikTok icon donned a half-dress, half-tuxedo.

Apparently, two men arriving to a show together and a man in a dress made the show not suitable to under-18s, a Moscow court ruled Wednesday (17 November).

Only days after it broadcasted in June, the country’s telecommunications watchdog, the Roskomnadzor, said it would comb through the ceremony for “violations” of the so-called “gay propaganda law”.

Following a probe, the agency said the event had been marked with a “6+” age restriction rather than the required “18+”.

This meant that the event did violate the “gay propaganda law”, a plank of president Vladimir Putin’s agenda that bans the mere “promotion” of LGBT+ themes to minors.

The Roskomnadzor carries immense power in Russia, often wielded by the Kremlin like a club to batter broadcasters into submission and censor what content citizens see.

It has dubbed LGBT+ short films as harmful to children, shut down vital HIV health websites, removed queer social media pages and said a children’s book about queer families is “18+”.

Such censorship and crackdowns are all too common in Russia, where Putin has sought to position LGBT+ rights as a decadent import from the West.

Signed in 2013, the “gay propaganda law” is actually a series of statutes introduced at the regional levels as early as 2003.

By the time they reached the federal level a decade later, the law was seen by critics as a cover for the open abuse and discrimination of of LGBT+ people.

Human rights experts have warned that the law has provoked stigma, harassment and violence towards queer Russians and prevented them from accessing crucial support services.

Europe’s top human rights court ruled in 2017 that the law is “discriminatory and, over all, serves no legitimate public interest”.