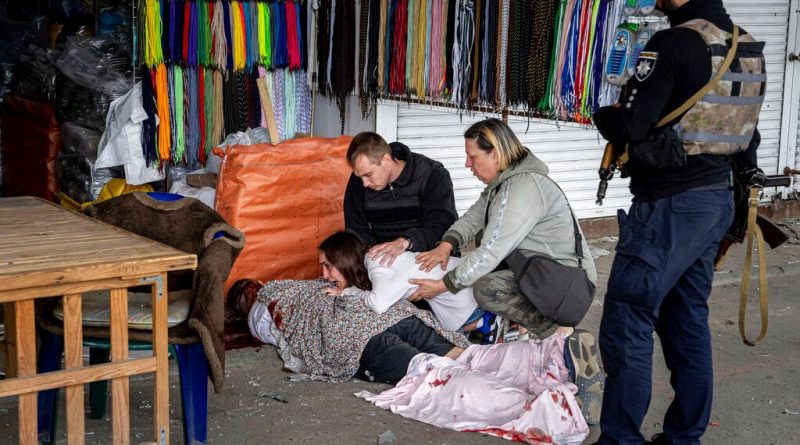 
KHARKIV, Ukraine — Russian shelling pounded a densely populated area in Ukraine’s second-largest city Thursday, killing at least three people and injuring at least 23 others with a barrage that struck a mosque, a medical facility and a shopping area, according to officials and witnesses.

The bombardment came after Russia reiterated its plans to seize territories beyond eastern Ukraine, where the Russian military has spent months trying to conquer Ukraine’s Donbas region, which is south of Kharkiv. The Russian declaration Wednesday came after Ukrainian officials aired plans to try to recapture Russian-occupied areas near the country’s southern Black Sea coast.

Kharkiv Mayor Ihor Terekhov said the attacks early Thursday targeted one of the most crowded areas of the city, which had a prewar population of about 1.4 million.

Read More: Where Russia’s War in Ukraine Stands—And What Could Happen Next

At the market, desperate screams of Sabina Pogorelets pierced the air as she begged Ukrainian police to let her embrace her husband, Adam, whose body was lying partly covered with cloth next to a small stall. A bloody wound could be seen on his head as policemen gently pulled his wife away so medical workers could take away his body.

“Please! I need to hold his hand!” Pogorelets cried.

Nearby, a man hugged his small daughter as he and other visitors stood in shock. Emergency teams treated at least two of the wounded in nearby ambulances.

“People started working little by little, they came out to sell things, and residents came here to buy things,” said Volodymyr Tymoshko, head of the National Police in the Kharkiv region. “And exactly this place was hit by “Uragan” rockets with cluster bombs to maximize the damage to people.”

The cluster bombs claim could not be independently confirmed. AP journalists at the scene saw burned-out cars and a bus pierced by shrapnel.

The Kharkiv regionial governor, Oleh Syniehubov, said four people were in grave condition and a child was among those wounded in the shelling. Russian forces also shelled wheat fields, setting them on fire, he said.

Elsewhere, Russian forces shelled the southern city of Mykolaiv overnight as well as the eastern cities of Kramatorsk and Kostiantynivka, where two schools were destroyed, Ukrainian officials said. A man’s body was recovered from the rubble of the school in Kramatorsk and emergency workers say two more people are feared trapped under the ruins.

Analysts from the Institute for the Study of War, a think tank based in Washington, said the current Russian offensive in Donetsk may result in the capture of the cities of Sloviansk and Bakhmut. But they noted that “Russian troops are now struggling to move across relatively sparsely-settled and open terrain. They will encounter terrain much more conducive to the Ukrainian defenders.”

Ukraine’s military reported Thursday that Russian forces attempted to storm the Vuhlehirska power station in the Donetsk region, but said “Ukrainian defenders made the enemy resort to fleeing.” Ukraine forces on Wednesday struck a key bridge on the Dnieper River for the second time in as many days, apparently trying to loosen Russia’s grip on the southern Kherson region.

“Russia is prioritizing the capture of critical national infrastructure, such as power plants,” the British Defense Ministry said Thursday. “However, it is probably also attempting to break through at Vuhlehirska, as part of its efforts to regain momentum on the southern pincer of its advance towards the key cities of Kramatorsk and Sloviansk.”