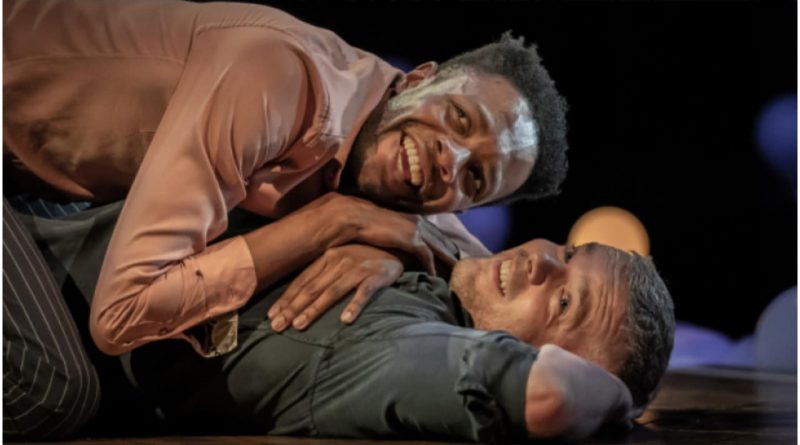 Omari Douglas and Russell Tovey star in Constellations at the Vaudeville Theatre between 30 July and 11 September. (Mark Brenner)

Omari Douglas and Russell Tovey are adorable in the first-look images of West End revival Constellations.

The duo are currently starring in the play at London’s Vaudeville Theatre and the first production images have been released.

Fans can catch them in the show until 11 September with tickets still available from lovetheatre.com and londontheatredirect.com.

They previously appeared in rehearsal images which saw them reading from their scripts, but this time theatre goers get a glimpse into the actual play.

The pair appear on stage in a romantic setting, surrounded by lit-up balloons, and getting pretty close to each other.

The plot follows a quantum physicist and a beekeeper – played by Omari and Russell – who meet at a barbecue.

The synopsis reads: “They hit it off, or perhaps they don’t. They go home together, or maybe they go their separate ways.

“In the multiverse, with every possible future ahead of them, a love of honey could make all the difference.”

This latest West End revival of the play comes with a twist as it will see four sets of two cast members take turns to give the play a fresh perspective.

Peter Capaldi and Zoë Wanamaker finished up their run on 24 July and Sheila Atim and Ivanno Jeremiah finished on 1 August.

Omari and Russell are currently starring in the show until 11 September, with a queer take on the “journey through the multiverse and the infinite possibilities of a relationship.”

The final pair will see Anna Maxwell Martin and Chris O’Dowd perform on dates between 6 August and 12 September.

It debuted at London’s Royal Court Theatre in 2012 before transferring to the West End later that year and has since premiered on Broadway, starring Jake Gyllenhaal.

Russell Tovey and Omari Douglas will star in Constellations at Vaudeville Theatre between 30 July and 11 September.

Theatre goers can get their hands on tickets from lovetheatre.com and londontheatredirect.com.