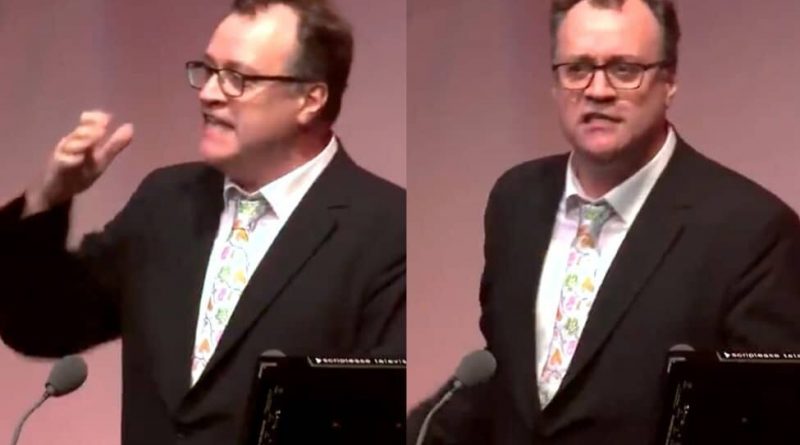 
Russell T Davies ridiculed the LGB Alliance in a powerful speech that highlighted just how sinister its anti-trans rhetoric is.

The BAFTA-winning TV writer spoke passionately of the need for trans allyship as he collected the Inspiration Award for his seminal drama, It’s a Sin, at the 2021 Attitude Awards.

After commending “inspiring” HIV and AIDS workers and condemning the “b*****d” Tories, he made no secret of his scorn for the LGB Alliance, an anti-trans charity created in opposition to Stonewall’s policies on transgender inclusion.

“One of their favourite things to do is say: ‘Oh LGBTQIA+, isn’t that funny, you’ve got so many letters.’ In what society is having too many letters a bad thing? More letters is good, more letters includes everyone.

“So I thought to myself, can you do that?” Davies asked, before demonstrating just how limiting it is to talk only in words of three letters or less.

The power of these simple words saw the audience erupt in applause.

Russell T Davies blasts the LGB Alliance as he collects the Attitude Inspiration Award on behalf of It’s A Sin at the 2021 @VirginAtlantic #AttitudeAwards, powered by @JaguarUK. pic.twitter.com/V9Eib2acyd

The LGB Alliance gained charitable status earlier this year in spite of fierce objections from multiple LGBT+ charities and a petition signed by more than 44,000 people.

It claims to advocate for the rights of lesbian, gay and bisexual people, but doggedly concentrates its efforts on opposing trans inclusion.

The charity reached a new low in August when it compared the LGBT+ acronym to bestiality.

“Adding the + to LGB gives the green light to paraphilias like bestiality – and more – to all be part of one big happy ‘rainbow family’. Wake up policy makers,” it said in a now-deleted tweet.

“LGB people refuse to be used in your artificial and dangerous argument that we must all be lumped together. #NoToHomophobia.”

The LGBT+ acronym is used to describe all people who fall under the queer umbrella, including the intersex, asexual and aromantic communities, and its use is widely encouraged to promote inclusion and acceptance.

The LGB Alliance’s shocking tweet breached Twitter’s rules on hate speech and prompted discussions with the Charity Commission, the official regulating body for charities in England and Wales.

The decision to register the LGB Alliance as an official charity is now subject to an appeal lodged by the trans children’s charity Mermaids.