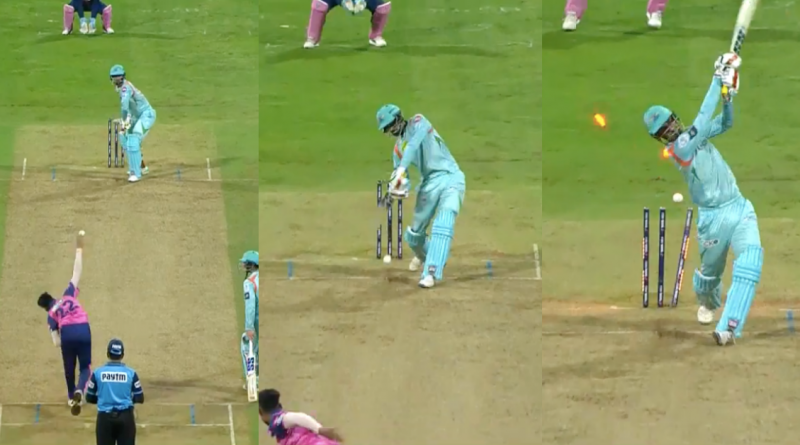 
Kuldeep Sen, the young fast bowler from Rewa, Madhya Pradesh, cleaned up Deepak Hooda for 25 in his 2nd over.

Kuldeep Sen is making his debut in the IPL. He replaced Navdeep Saini in the XI.

Lucknow Super Giants didn’t have a great start to their chase as their captain KL Rahul was once again dismissed for a first-ball duck. This time by Trent Boult who bowled a brilliant in-swinger to get rid of Rahul.

Krishnappa Gowtham came in at 3 but he too was trapped in front of the wicket by Boult on his very first ball.

LSG was rocked early in the very first over as they were reduced to 1-2 in their quest of 166 runs.

In a surprise move, Jason Holder came in to bat at 4 but it didn’t work out for LSG as Prasidh Krishna accounted for his wicket.

Deepak Hooda coming in at 5 played some glorious shots and tried to resurrect the innings with Quinton de Kock but in trying to play across the line and put pressure on the young Kuldeep Sen, he lost his wicket.

When he got out, LSG still needed more than 110 runs to win in under 11 overs.

Earlier in the day, Rajasthan Royals didn’t have the best of batting displays as they lost wickets in the regular intervals after they lost Jos Buttler for a low score.

R Ashwin coming in at 6 had a good partnership with Shimron Hetmyer which put things back on track for the Royals.

Hetmyer finished the innings strongly for RR as he scored 59 runs off 36 deliveries. His brilliant knock took RR to a respectable total of 165 runs in their 20 overs.

For LSG the pick of the bowlers was Gowtham who took 2 wickets for 30 runs. He got the wickets of Devdutt Paddikal and Rassie van der Dussen in the same over.