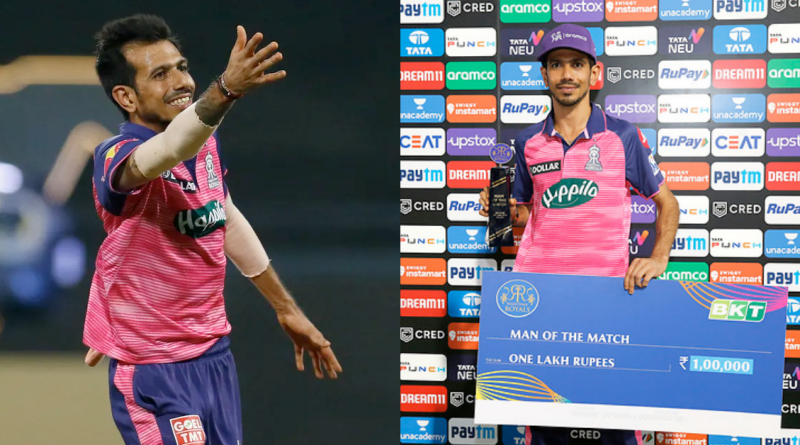 Yuzvendra Chahal picked up 4 wickets and moved to the top of the purple cap list. But more than that he helped his side Rajasthan Royals racked up an important win over Lucknow Super Giants.

RR won the game by just 3 runs, Chahal played an important role in the win as he got crucial wickets in the middle overs.

Yuzvendra Chahal went for 41 runs, but he picked up 3 crucial wickets in the middle. He dismissed Quinton de Kock, Krunal And Ayush Badoni and dented LSG’s pursuit to 165 runs.

He got de Kock’s and Pandya’s wicket in the same over which more or less shifted the game towards the Royals. Some late order hitting by Marcus Stoinis did take the game close but eventually, RR came on top.

Yuzvendra Chahal was ably supported by Ravichandran Ashwin who gave away just 20 runs in his 4 overs. He didn’t pick up a wicket but he bowled economically.

Chahal’s wickets came at a time when LSG were looking to attack more in the middle overs as their required run rate was going higher. After the game, Chahal said, “I’ve been bowling well always, in the middle I had a bad patch, but my main strength is my mind and I didn’t want to divert from that.”

On being asked how it’s to bowl with the wet ball, he said that it was tough but it’s what the team needed.

“I am ready to bowl any time. I thought to protect runs so that it will be useful later. My favourite wicket was de Kock’s dismissal since he set and is a gamechanger”, he added.

Chahal in the process also reached a new landmark as he got to 150 IPL wickets.