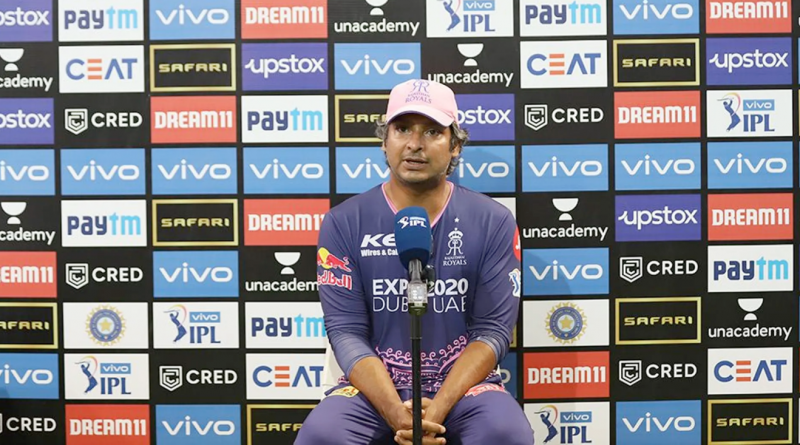 
Rajasthan Royals’ Director of Cricket, Kumar Sangakkara, has opened up on the decision of demoting Riyan Parag in the batting order against Lucknow Supergiants on Sunday. In what proved to be a thriller of an encounter in IPL 2022 between Rajasthan and Lucknow, the Royals came out on top with a 3-run victory against the Supergiants in Wankhede Stadium on Sunday.

Rookie Kuldeep Sen was handed the massive responsibility of defending 15 runs in the last over as he faced Marcus Stoinis who took the RR bowlers to the cleaners in the last two overs. Sen outfoxed Stoinis with deliveries in the slot that the Australian all-rounder was unable to connect with his large hoicks.

Requiring 14 off the last 5 balls, Sen bowled three dots which implied even a four and six to end the over wasn’t to the point of taking LSG over the line. The narrow 3 run victory took Rajasthan Royals to the top of the table.

“I had no conversation with Kuldeep before the last over,” said Kumar Sangakkara, RR’s director of cricket, after the game on Sunday (April 10). “It was Sanju, Jos, and the other players around him that supported him. We had pretty simple plans in terms of bowling at the death. I just want to say how impressed everyone, especially I am with how Kuldeep Sen handled his first game; how he bowled, how he thinks… He bowled the hardest over under pressure and did an excellent job for us.”

Questions were raised about LSG pushing Stoinis unreasonably somewhere down in a rearranged batting order on the evening. K Gowtham came in at No.3, Jason Holder at No.4, and Stoinis came to the center in the sixteenth over.

“Throughout the 20 overs, we kept believing we could win this game,” said Rahul. “We have depth in our batting, today Stoinis batted at No.8, when you have someone like that with so much power and who is such a destructive batsman… that’s one of the reasons he’s our second retained player.

LSG was by all accounts, not the only side that shuffled their batting order. Rajasthan themselves had sent R Ashwin at No.6, keeping down Riyan Parag for some other time.

Rassie van der Dussen, playing his first game of the tournament, was sent in at No.4, while Parag just confronted four balls for his 8 runs prior to falling in the last over. Ashwin was retired out in the nineteenth over after a 23-ball 28 and cleared a path for Parag.

“It was the right time to do that,” said Sangakkara of Ashwin’s decision. “Ashwin himself was asking from the field as well and we had discussed just before that as to what we would do.”

“As the coach, I got one call wrong not sending Riyan Parag ahead of Rassie van der Dussen and holding Rassie back so we couldn’t get the full benefit of Riyan, but how Ashwin handled that situation, walking in under pressure, he batted, supported the team and then finally sacrificed himself in terms of retiring himself out and then backed it up with a magnificent bowling effort. And of course Boult. Yuzi Chahal, Prasidh Krishna, and Kuldeep Sen all of these bowlers were outstanding under pressure with the dew.”

While RR’s bowlers should be given credit where due, LSG were reeling at 101 for 6 when Quinton de Kock fell. It seemed as though RR would get a familiar success, yet some late counters from LSG hauled the game out till the last over. Stoinis stayed unbeaten on a 17-ball 38 eventually.