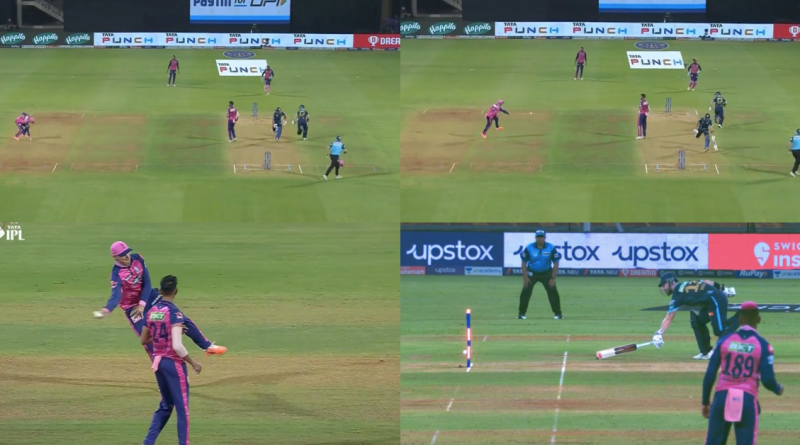 
Rassie van der Dussen of Rajasthan Royals (RR) ended the short stay of Matthew Wade of Gujarat Titans (GT) in their clash in the 24th match of the Indian Premier League (IPL 2022) being played at the DY Patil Stadium in Navi Mumbai on April 14, 2022.

RR came into this match as the no.1 placed team on the IPL 2022 points table and captain Sanju Samson celebrated by winning his first toss in the ongoing edition of the tournament. Both teams made some changes to their XI as GT included Vijay Shankar and Yash Dayal for Sai Sudharshan and Darshan Nalkande. For Rajasthan Royals, Jimmy Neesham came in for Trent Boult, who had a niggle.

Matthew Wade got another chance to prove himself by giving GT a good start and taking some burden off Shubman Gill, who is in good form. However, it was not to be, as despite getting a good start, Wade couldn’t continue his innings for long.

On the second ball of the second over, Matthew Wade, who had scored 12 runs in the first over, hitting Jimmy Neesham for 3 boundaries, tried to respond to a risky single. Shubman Gill dropped a ball near him and went for a run to which Wade responded.

However, Rassie van der Dussen swooped in from cover and ran down the wicket at the striker’s end. It was a direct hit and replays showed that Wade was well short of his crease and he had to walk back as RR celebrated.