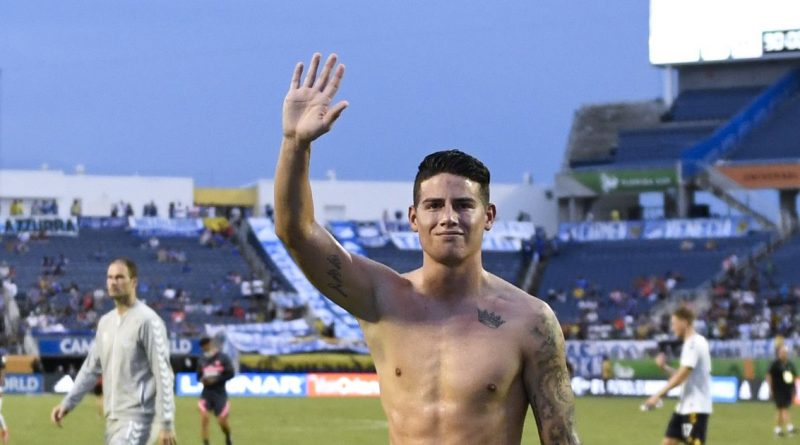 
Qatar Star League club Al-Rayyan will announce the signing of James Rodriguez imminently, with Everton manager Rafael Benitez pinpointing the cause of the Colombian’s exit

Outgoing Everton playmaker James Rodriguez will shortly be unveiled as an Al-Rayyan player, with he Qartari club teasing his arrival on their social media accounts.

Rodriguez has been in the Middle Eastern nation for transfer talks as he looks to leave the Toffees one year after joining from Real Madrid.

The Colombia star penned a two-year deal with the option for a third at Goodison Park in order to reunite with his former Los Blancos manager Carlo Ancelotti.

But Rodriguez was left in the lurch after Ancelotti returned to the Spanish capital this summer and there were claims he was not in new Everton boss Rafa Benitez’s plans.

James Rodriguez has not made an appearance for Everton this season

The 30-year-old reportedly earns £200,000 per week at Everton and Benitez insists he must leave in order for the club to abide by Financial Fair Play (FFP) rules.

“We are talking about a special situation for this club,” Benitez said of Rodriguez’s situation on Tuesday night. “The financial fair play rules, we have to manage everything in the best way we can.”

Benitez was otherwise tight-lipped regarding Rodriguez’s imminent transfer to Al-Rayyan as he spoke after the penalty-shootout defeat by Queens Park Rangers in the Carabao Cup third round.

“To be fair, I don’t have too much information,” said Benitez. “I know he (Rodriguez) is already there (Qatar). Maybe in the next couple of days we will have some more information.”

Al-Rayyan’s social media post teeing-up Rodriguez’s arrival features a countdown before a silhouette of a player and the words “coming soon” appear.

Discussing Rodriguez after Everton’s 3-1 victory over Burnley earlier this month, Benitez said: “It’s always up to the player. In the end he has the final decision.

How will James Rodriguez’s one season at Everton be remembered? Have your say in the comments.

“Some markets are open and then we had some problem with the Financial Fair Play rules, so we need to consider any option and see what happens.”

Benitez was unhappy with FFP over the summer, claiming the regulations had “killed” the club by preventing him from making signings.

Indeed, the vast majority of the Toffees’ arrivals came via free transfers, including Andros Townsend, Asmir Begovic and Salomon Rondon.

The new signings have hit the ground running even in the absence of Rodriguez, who registered six goals and nine assists last season.

Townsend and Gray have both scored three goals and Everton sit sixth in the Premier League with three wins, one draw and one defeat from their opening fixtures.