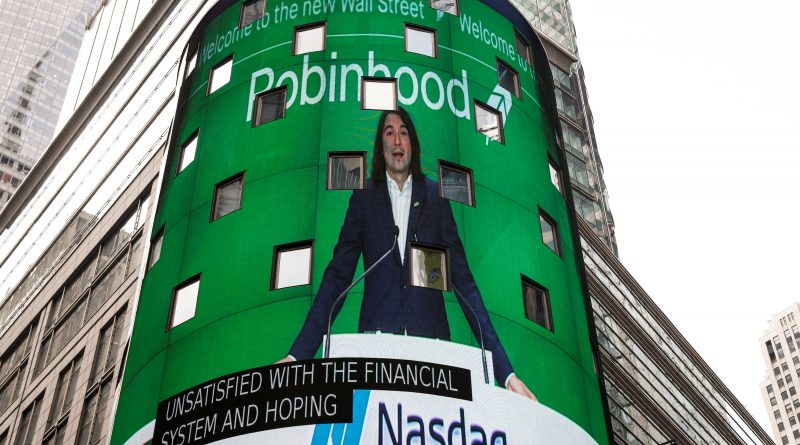 Vlad Tenev, CEO and co-founder Robinhood Markets, Inc., is displayed on a screen during his company’s IPO at the Nasdaq Market site in Times Square in New York City, U.S., July 29, 2021.

Shares of Robinhood dropped on Monday amid several bouts of bad news for the brokerage app.

Robinhood’s stock fell 6.9% to $43.64 per share after Securities and Exchange Commission Chairman Gary Gensler told Barron’s that banning the controversial practice of payment for order flow is “on the table.”

Gensler told the outlet that payment for order flow — the back end payment brokerages receive for directing clients’ trades to market makers — has “an inherent conflict of interest.”

Payment for order flow is one of Robinhood’s largest revenue sources and the way the millennial-favored stock trading app is able to provide zero-commission trading. Payment-for-order flow is a controversial practice that has garnered attention from the Financial Industry Regulatory Authority and Main Street.

Following an epic short squeeze in GameStop’s stock in January that forced Robinhood to limit trading on certain securities, Robinhood’s chief Vlad Tenev was forced to testify to the U.S. House Financial Services Committee in February. Legislators criticized payment for order flow for the conflict it has with market makers like Citadel Securities.

“We think payment-for-order flow is a better deal for our customers, vs. the old commission structure. It allows investors to invest smaller amounts without having to worry about the cost of commissions,” Robinhood CFO Jason Warnick said during the company’s virtual roadshow before its IPO.

Robinhood has said that if the PFOF model changed, the brokerage and the industry would be able to adapt.

Gensler’s comments come after the SEC said Friday it is stepping up its inquiry into so-called gamification and behavioral prompts used by online brokerages and investment advisors to prod people to trade more stocks and other securities.

Shares of Robinhood were already lower on Monday after CNBC reported that PayPal is exploring ways to let users trade individual stocks. The SEC did not immediately respond to CNBC’s request for comment.

As part of the expansion, according to one of the sources, the payment giant hired a brokerage industry veteran to lead “Invest at PayPal” — a previously unreported division of the payments giant.

Robinhood went public on the Nasdaq last month, hitting the public markets it seeks to democratize for amateur investors. Since the debut, shares of Robinhood have had a wild ride. After sinking on the first few days of trading, the company had a meme stock moment when it rallied 50% amid retail investor interest.

HOOD shares are up more than 24% in August.