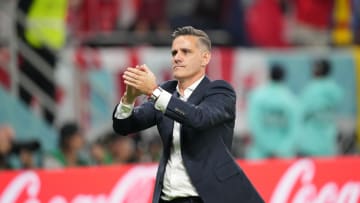 
Belgium manager Roberto Martinez has accused the media of peddling fake news over a reported rift in his Red Devils squad.

That defeat has left Belgium uncertain of their World Cup future. A win against Croatia will take them into the knockout stages as group winners if Morocco fail to win. However, if Belgium draw and Morocco match or better that result, they will be going home earlier than expected.

L’Equipe reported that striker Romelu Lukaku was required to physically pull apart his fuming teammates during an inquest into the defeat. Martinez didn’t appreciate the stories and hinted at a larger ploy from the media to unsettle his side.

He said: “You’ve got some outlets in Belgium who are quite happy to jump on fake news, which is quite astonishing. It has made the group more aware that the less they listen to the noise from the outside, the better.

“A World Cup is the biggest sporting event in the world and there are many World Cups getting played. You can see that maybe a country like France did a good job with a story that became the main talking point of the outlets in Belgium.

‘It shows that maybe there is more desire to find negative news around this team than get the nation together, support this team, enjoy the talent of the best generation that we’ve ever had in Belgian football.

“That was a lesson for all of us that we are here on our own. We are here to fight for what we believe is the way we want to play and hopefully the fans – the real fans – of the Red Devils can enjoy the process.”

Belgium squandered their best opportunities to record silverware with their golden generation at both Euro 2016 and the 2018 World Cup – the latter of which where they finished third – and the ageing squad is not favoured to reach the deep stages of the tournament in Qatar.

Group F was predicted to be tight, and three teams could progress into the World Cup round of 16 heading into the final group games. Here’s how each of them can secure their respective places in the knockouts.