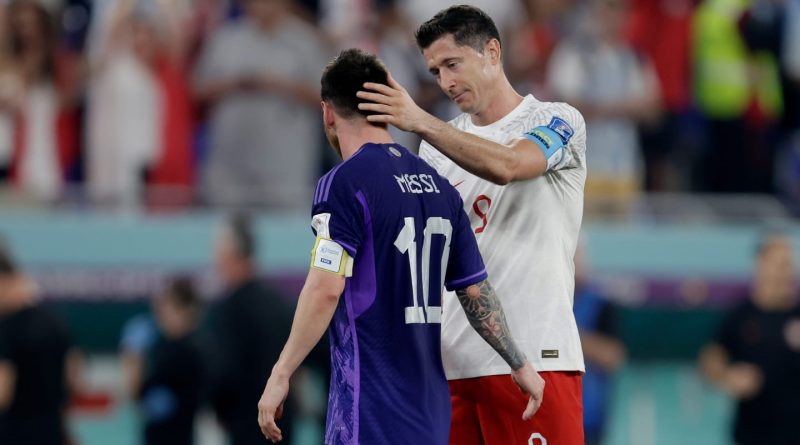 
Robert Lewandowski has detailed what was said during a minor altercation with Lionel Messi during Poland’s World Cup loss to Argentina on Wednesday.

La Albiceleste ran out 2-0 winners to ensure they finished top of Group C. The Eagles still scraped through to the next round on goal difference, but spent part of the match trying not to pick up bookings as it looked like a fair-play tiebreaker could come into play with Mexico.

During the loss, Lewandowski notably hauled down Messi in the middle of the pitch, but when attempting to offer an apology, the current Barcelona forward was ignored by his predecessor.

Speaking to the media post-match, Lewandowski revealed he did get to speak to Messi briefly.

“We talked a bit and it was fun. I told Messi that he was playing more defensively than usual, but sometimes that’s what the team needs,” he said.

“[The incident] was very strange, yes: I was in the centre of the pitch defending, but I knew I had to help the team.”

Harry Symeou hosts Jack Gallagher and Toby Cudworth to look back on Germany ’06 as part of the ‘Our World Cup’ series. We take a trip down memory lane – join us!

If you can’t see the podcast embed, click to download or listen to the episode in full!

Lewandowski, who scored his first World Cup goal in Poland’s win against Saudi Arabia, will prepare to battle France in the last 16 on Saturday, with the winner advancing to face either England or Senegal in the quarter-finals.

Messi’s Argentina will take on Australia on Saturday, who managed to pip Denmark and Tunisia to second place in Group D.