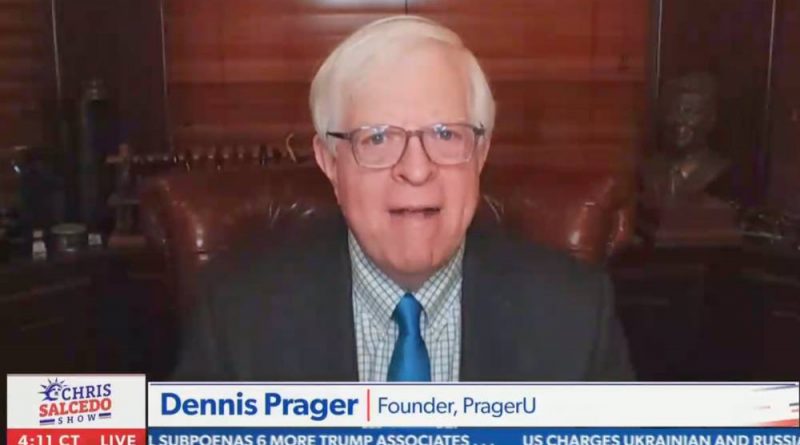 Dennis Prager claimed it would have been “inconceivable” if the gay men alive during the AIDS crisis were treated like “pariahs” like modern anti-vaxxers. (Twitter/@JasonSCampbell/Newsmax)

Prager, a conservative radio show host and founder of media company PragerU, defended people who refuse to take the COVID-19 vaccine during an appearance on Newsmax.

He alleged in the segment that anti-vaxxers are the modern “pariahs of America” more so than any other “pariah group”. Prager then launched into a misinformed rant comparing people who choose to not get vaccinated against COVID-19 with the experiences of the gay community during the AIDS crisis in the 1970s and 1980s.

Dennis Prager: “During the AIDS crisis, can you imagine if gay men and intravenous drug users…had they been pariahs the way the non-vaccinated are? But it would’ve been inconceivable” pic.twitter.com/GQsOq4X63u

Given his bizarre claims, it would appear that Prager has never read up on the horrific treatment of queer men during the AIDS crisis and the impact anti-HIV stigma has had on the modern queer community worldwide.

HIV, which stands for “human immunodeficiency virus”, is a virus that attacks the cells that help the body fight infection. If left untreated, HIV will develop into acquired immune deficiency syndrome (AIDS), which occurs when the body’s immune system is badly damaged because of the virus.

HIV slowly spread across the world and has existed in the US since at least the mid to late 1970s. In 1978, Dr Joseph Sonnabend, a pioneering researcher who passed away earlier this year, was among the first clinicians to recognise the emerging AIDS epidemic when gay men in his practice were becoming sick with rare immune-suppressed illnesses.

The first official US government report on AIDS came in June 1981, in the Morbidity and Mortality Weekly Report, and the CDC would use the term AIDS for the first time over a year later in September 1982.

It wasn’t until September 1985, four years after the first official report, that president Ronald Reagan first publicly mentioned AIDS after a reporter brought it up in a news conference. He would give his first major speech about the AIDS epidemic two years later.

By then, HIV and AIDS was already a full-blown epidemic and was referred to at the time as the “gay plague” as gay men were one of the primary groups afflicted. The rise in cases led to fierce anti-gay backlash across the US as people living with HIV and AIDS were disowned from their families, subjected to horrific homophobic violence and stigmatised by society.

Misinformation was rife about the spread of HIV and AIDS with many people falsely believing an individual could contract HIV just from being in proximity to a gay person, which is not true.

During the height of the AIDS crisis, lesbians referred to as the Blood Sisters bravely stepped in to help and care for the sick when medical professionals did not.

Decades later, HIV and AIDS continue to be stigmatised and remains a major public health crisis both in the US and around the world. While major scientific advances have made it easier to prevent and treat the virus, there is still no vaccine or cure.

In contrast, the scientific world has made great strides in the almost two years since the novel coronavirus was first identified. Governments worldwide rolled out lockdown measures and eventually vaccines to help protect the public from the virus.

Despite what conservatives may think, there are no reported cases of mass discrimination or violence against those who choose not to vaccinate themselves against COVID in the US or UK.