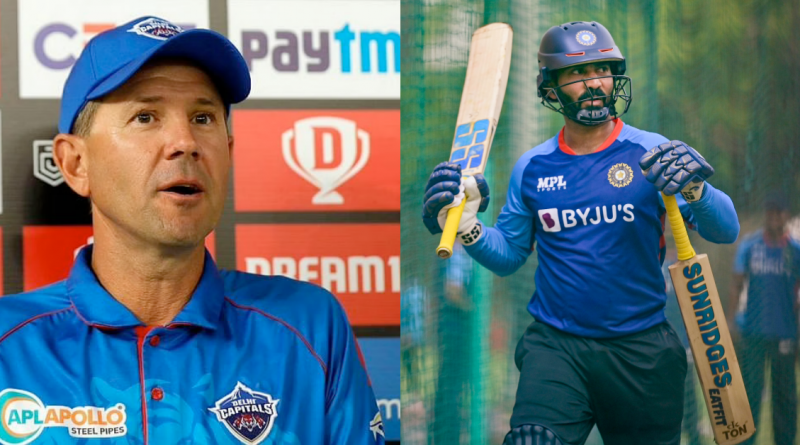 
Batting legend Ricky Ponting is delighted by Dinesh Karthik’s finishing skills and believes that the veteran keeper-batsman can play a finishing role for India at the ICC Men’s T20 World Cup in Australia in 2022.

After a fantastic IPL performance as a finisher for Royal Challengers Bangalore, Karthik fought his way back into the Indian team at the age of 37.

Karthik was outstanding for RCB this season, taking on bowlers at the end of the innings. Karthik made 330 runs at a strike rate of over 183, and his form has prompted calls for him to be named to India’s T20 World Cup side, which Ponting supports. Ponting stated that he would like to see Karthik bat at No. 5 or No. 6 for India in the T20 World Cup, adding that he would be astonished if the experienced wicketkeeper is left out.

While talking to Isa Guha for ICC review, Ponting said:

“I would have him, and I’d have him in at that five or six role. The way that he finished games for RCB this year, he took his game to another level. When you look at the IPL, you want your better players to maybe be able to win two or three, maybe four games through the season.

“If you can get that out of them, it’s probably going to be a really good return. But Dinesh probably had a bigger impact on a lot of the games than most of the other RCB players did this year.

“Virat (Kohli) having the year he’s had, Maxi (Glenn Maxwell) started the tournament really well but DK was the one. And Faf too I guess, who kept the RCB bandwagon rolling. I’d be surprised if he’s not in there (India) line-up somewhere,” Ponting added.

Karthik faced just 2 balls in his return to the Indian side and made a run.

Also Read: IND vs SA: It Was More About The Battle I Won Against Myself: Hardik Pandya On His Comeback