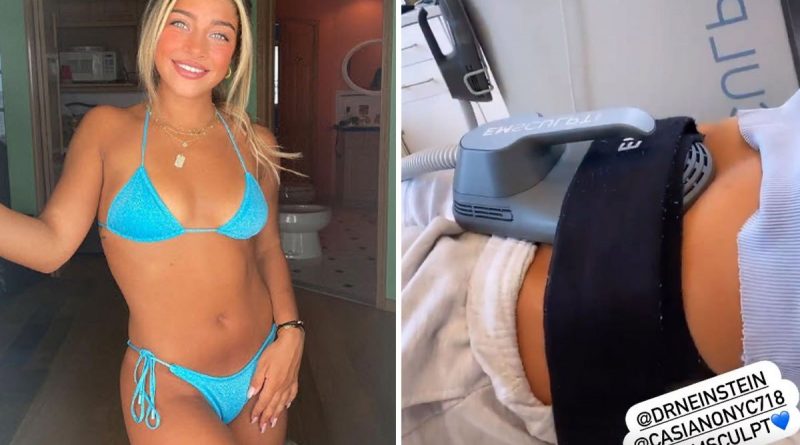 
GIA Giudice visited a plastic surgeon’s office again as she got more treatments after fans accused her of changing her looks.

On Tuesday the daughter of Real Housewives of New Jersey star Teresa Giudice got an ab sculpting procedure which she shared to Instagram.

Gia, 20, posted a clip which showed just her waist as she wore the Neo Emsculpt contraption.

In the caption Gia tagged her plastic surgeon and put a blue heart.

It’s not the first time Gia has had the cosmetic procedure done.

Earlier this month she revealed she was “excited to see the results” as she had the tummy toning gadget strapped around her waist.

‘SO EXCITED TO SEE THE RESULTS’

Gia revealed she was trying the Emsculpt Neo procedure, as she said: “I’m so excited, this is my first time doing it and I’m so excited to see the results.”

According to the website, Emsculpt builds muscle and reduces fat using both radio frequency and high intensity electromagnetic energies.

Then, in another post, Gia revealed she was having the procedure to help with acne scarring as a nurse worked on her face with a laser.

She wrote in the caption: “I was very prone to acne growing up which left me with acne scares… I can’t wait for them to be off my face.”

It comes after Gia was slammed by fans accusing her of going under the knife and having more cosmetic procedures.

The star previously admitted to getting a nose job, but fans think she’s gone even further and are commenting on her “changing face.”

Now the star is inundated with comments under every picture she posts on her official Instagram of 786,000 followers accusing her of “having too much filler.”

On recent snaps someone commented: “I wish she had stayed natural. Seems like a nice kid.”

Another wrote: “Too young to need all that work done. You have ruined your natural beauty.”

In a photo alongside her famous mom, Gia wrote: “Yes I got a nose job.

“I am an adult now, this has been an insecurity of mine for a while and I’ve never been happier and so comfortable in my own skin!!”