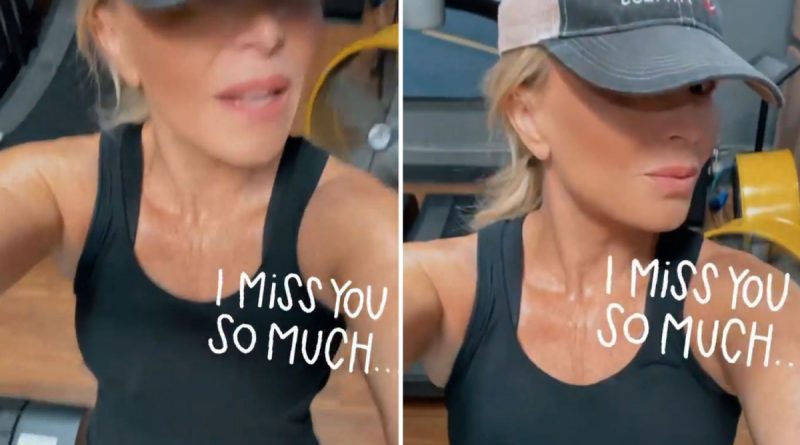 The 53-year-old recently hit the gym for the first time since her breast implant removal surgery.

Tamra took to her Instagram Story on Tuesday to share a clip of herself riding a stationary bike.

She wore a tight black top, matching leggings and a gray baseball cap, while her blond hair was pulled back into a low ponytail.

Without stopping her workout, the RHOC alum told her followers she was at her “happy place.”

Additionally, text on screen read “Starting cardio & legs today” and “I miss you so much…”

Back in June, Tamra revealed her plan to remove her implants after a long journey with breast augmentation.

She decided to get “very small” implants five years later, though has recently chosen to have them removed once more due to “autoimmune issues.”

Tamra said she was over “being tired and inflamed” and had even gotten “hives” as “one” of the side effects.

Although she made the decision to remove her implants, she did tell fans on her Instagram Stories that she wouldn’t have been in a “rush” to get rid of them if it weren’t for health issues.

TAMRA GOES UNDER THE KNIFE

In July,  the Bravo star document the day-long procedure as she prepared for surgery in a hospital cap and gown.

The California native was joined by her husband Eddie and two Bravo cameras as she went under the knife for the implant removal.

“I did it. I couldn’t do it without this guy,” she told fans during recovery while filming her husband of eight years.

She later updated her fans on the way home, stating: “Hi guys, I am alive. The surgery went great. They removed my implants, the capsule around it, and I’m really looking forward to feeling better, not having to deal with all these issues.

“I pray to God that helps with everything.”

KEEPING FANS IN THE LOOP

Just weeks later, the RHOC alum took to Instagram to share an update after her breast implant removal surgery.

She posed makeup-free in a pink sports bra and rolled up sweatpants as bandages hung from her chest down her stomach.

Tamra wrote: “Implants & capsules removed. Feeling tired & a little sore as expected. I’m pretty sure Not working out will be the hardest part for me.

“I know it sounds crazy but I woke up today with rosy cheeks, No sinus congestion, and happy thoughts.

“I’m hoping I will continue to see health improvements as the weeks go on. I Just got home from my check-up with @dr_ambe and everything looks great.”

The TV personality continued: “(Disclaimer- although I do have a good amount of breast tissue, what you’re seeing is swelling, two-layer padded bra, and gauze 😜) I’m excited to be sharing my BII journey with you in September… stay tuned for more info.”