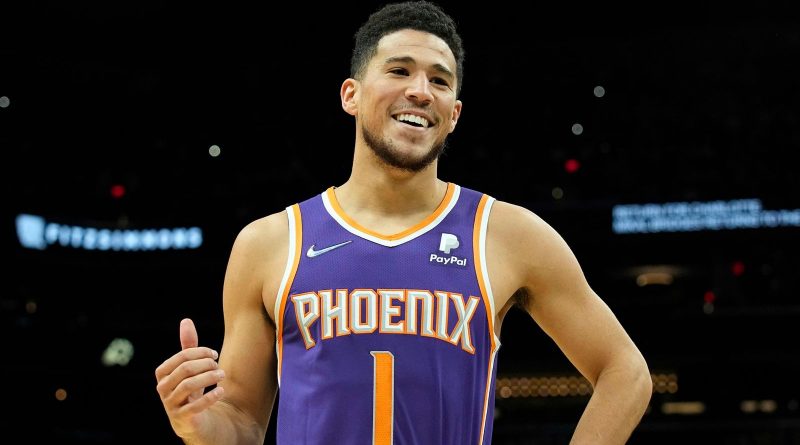 
In Phoenix’s last game, a victory over Washington on Thursday night, the Suns had eight players score in double figures. Devin Booker returned to action Sunday night – and they had nine.

Booker is back for the team with the best record in the NBA and scored 16 points in his return from a hamstring injury and the NBA-leading Suns set a season-scoring high in a 137-106 victory over the Charlotte Hornets on Sunday night.

After missing seven games because of a hamstring injury, the two-time All-Star played 26 minutes and sat out the fourth quarter. The Suns never trailed, led by as many as 36 and improved to 24-5, moving a half-game ahead of Golden State.

“I learned some things from the sideline that I tried to implement today,” said Booker, who was 4 of 8 from 3-point range. “The machine keeps moving even in games we had people out. Somebody steps up and jumps right into that role.”

The 25-year-old guard suffered a left hamstring injury in Phoenix’s nationally televised win over the then-first-place Golden State Warriors on November 30. The victory was part of a franchise-record 18-game win streak, one that ended two games later when the Booker-less Suns lost to the Warriors in San Francisco.

The defending Western Conference champion Suns went 5-2 without Booker. That, combined with Golden State losing four of its last 10, has seen the Suns rise to the top of the standings entering Sunday’s game.

The Suns are 14-0 at home after losing their first two. The Elias Sports Bureau is the Suns had at nine players score in double figures for the first time since April 21, 1991, against Portland. On Sunday against the Hornets, Phoenix made 20 of 41 3-point shots, also a season high for that category, and shot 56.8 per cent overall.

“We have a ‘we score’ mentality,” Suns coach Monty Williams said. “We score, we defend and I think when you play that way, it creates a lot of opportunity to shoot the ball from range or attack the paint.”

It started early as Phoenix built a 37-15 lead at the end of the first quarter.

“We just wanted to come in focused and make them pay,” Booker said. “If they made any mistakes defensively make sure we found the right person and shoot it with confidence.”

As for Booker, Williams said, “He didn’t look winded at all. He was gliding up and down the floor.”

Now in his seventh season, all with the Suns, Booker is averaging 23.2 points, 4.9 rebounds and 4.5 assists while shooting a career-best 40.3 per cent from 3-point range.