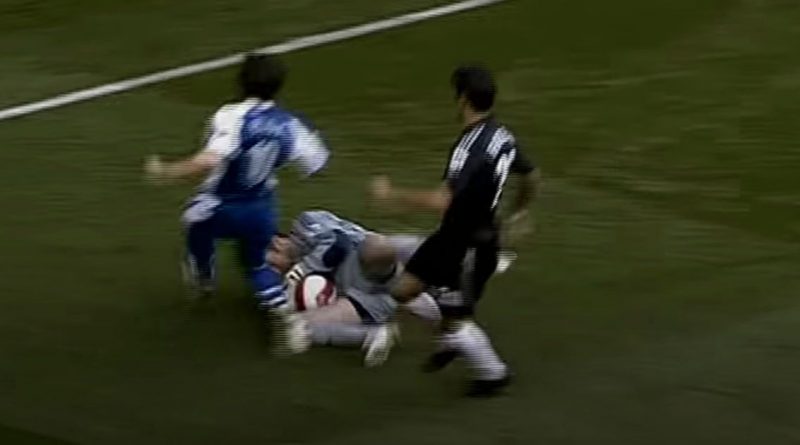 The clock had not yet reached 60 seconds at Reading‘s Madjeski Stadium before Chelsea goalkeeper Petr Cech’s afternoon’s work had endured prematurely.

Expecting to occupy his usual position between the sticks, the shot-stopper instead spent the rest of October 14, 2006 in the John Radcliffe Hospital neurological unit with a fractured skull.

Reading midfielder Stephen Hunt, clearly pumped up more than most given he had been rewarded with his first start of the 2006/07 campaign, would be involved for all the wrong reasons early on.

Chasing down Marcus Hahnemann’s clearance, Hunt was beaten to the ball by the onrushing Cech – who got down early to get both hands on the ball before the Irishman could attempt to loft the ball over the Czech international.

What followed was particularly gruesome, a mix of Hunt’s knee and then shin colliding with the forehead of the Blues goalkeeper – who for the first few seconds preceded to lay for the most part motionless – the occasional twitch of the leg in agony a welcome indicator that the clash was not as serious as some would have feared.

Chelsea’s goalkeeper was clapped off by the home faithful – who at the time were unaware of his fractured skull, but could recognise this was not your normal knock.

Their applause would mark the last time these two sides would share a harmonious moment related to the incident – the subsequent fall-out littered with finger pointing, accusations and death threats.

The ill-feeling occurred immediately after the game, when then-Chelsea boss Jose Mourinho claimed Hunt knew all too well what he was doing.

“The goalkeeper has the ball in his hands, slides and the number 10 cannot get the ball. He goes with the knee into his face,” the self-proclaimed Special One explained.

“If his head bones are not broken then he is a lucky boy. It was a very bad challenge. He was completely knocked out in the dressing room and went to hospital.

Mourinho hit out at Hunt after the match
(

“I’m not saying his intention was to send my keeper to hospital. But it was a very stupid challenge – one for the authorities to look at in the same way they looked at Ben Thatcher on Pedro Mendes [a punch to the face which knocked Portsmouth’s Mendes out and led to Thatcher being fined and suspended by his club Manchester City, and later banned for eight games by the FA].

“You see players avoiding the keeper by jumping or going with the foot for the ball but when a player goes with the knee direct to the face he doesn’t want to avoid him.”

What was unknown to many at the time was Cech was indeed a very lucky boy – one of triplets, the Czech international has a very thin skull, a feature inherent in triplets.

Mourinho then proceeded to double down on his earlier comments by accusing Hunt of laughing in the wake of the incident, “After that he turned, came back and was laughing right in front of us.

“He was motivating his people but gave not one single sign that he was worried about the situation.”

The former Blues boss ended up in particularly murky waters with his comments surrounding Cech’s admission to hospital, bemoaning how an ambulance was not on the scene quick enough.

Mourinho, clearly incensed by what had happened to his first-choice shot-stopper, explained it took half an hour for an ambulance to arrive.

Petr Cech was stretchered off after his clash with Stephen Hunt. (Photo by Steve Bardens/Offside via Getty Images)

His claims were swiftly rebuffed by Graham Groves of the South Central Ambulance Service, who revealed: “Chelsea called an ambulance at 17.45 which arrived at the ground at 17.52. Cech was in hospital by 18.11.

“The removal of the patient was a decision taken by Chelsea, who were offered two routes. One was round the pitch on a stretcher. The other was by a small lift, via a wheelchair.”

The Portuguese boss was annoyed at the lay-out of the Madejski Stadium and how hard emergency service responders found it to access Cech.

Cech was taken straight to hospital, but Mourinho criticised how long it took for the ambulance to arrive
(

“He could not leave the dressing room properly. He had to go in a wheelchair in the lift when he had the injury.

“If my goalkeeper dies in that dressing room or in the process [of going to hospital] it is something English football has to think about.

“This is much more important than football. I would like someone to tell me why my goalkeeper was left in this situation.”

Reading fired back at Mourinho, stating how his version of events contained “very serious factual inaccuracies”.

It has since emerged there was only one ambulance at the ground that afternoon, when all Premier League sides were encouraged to have two.

Jose Mourinho was damning in his assessment of Hunt after the incident. (Photo by Steve Bardens/Offside via Getty Images)

The anger among the Chelsea ranks were not felt by the manager alone, star striker Didier Drogba echoed his boss’s sentiments.

“It’s not an accident,” the Ivorian told L’Equipe. “He saw he was going to hit Petr and he didn’t try to avoid it.

“When Petr was carried out of the ground he was laughing.”

“Do I regret [the tackle]?” Hunt says. “No. Because I don’t feel I did anything to regret. Do I wish it didn’t happen? Of course.

“I’ve made that wish many times. I wrote a letter to him afterward, wishing him all the best.”

Intentional or not, Chelsea’s fierce response to the injury – whether it be the public war of words with Reading or their attempt to get the FA to take further action, ensured Hunt was public enemy number one.

Less than a month after the incident, Reading were left with little choice but to ask Thames Valley Police to investigate 20 letters – described as “seriously threatening” by a force spokesman.

The messages were sent to Reading’s training base, with one claiming: “We are going to kill you for what you did to our ‘keepers.” (back-up keeper Carlo Cudicini was also injured in the same game, leading to John Terry ending up in goal).

Nine years on, Hunt addressed both the collision with Cech and the reaction from Mourinho.

Speaking to Independent Ireland, Hunt expressed his remorse and lambasted the ex-Chelsea boss, explaining: “I was sickened by what happened to Petr Cech in our collision in 2006 but Mourinho said I had done nothing to avoid the goalkeeper and suggested I was laughing about it afterwards.

“He also made claims about the time it took an ambulance to reach Cech that were refuted in detail by the local ambulance service.

“There was one victim in my incident with Petr Cech and that was Petr Cech.

“Mourinho turned it into something else. It wasn’t enough that there was an injured party, there had to be a villain too. I became the villain in 2006.”

HAVE YOUR SAY! Was Mourinho wrong to publicly criticise Hunt? Comment below.

Amid all of this, it felt as if Cech’s welfare had been forgotten – the goalkeeper now some kind of pawn in Mourinho’s wider public game designed to motivate his players.

The narrative had been shifted from focus Cech’s well-being to a bitter exchange between managers, players and clubs – despite the fact the metal plates inserted into the ‘keeper’s skull should have been the primary concern of all.

Petr Cech, pictured on his first game back from the injury, wore protective headgear for the rest of his career. (Photo by Clive Mason/Getty Images)

From the October 14, 2006 up until his last competitive appearance in the colours of Arsenal, ironically against Chelsea on May 29, 2019 – Cech donned protective headgear for every game.

It quickly emerged as a talking point upon return, something that got under the skin of the shot-stopper.

“It irritates me that people say ‘he wears it because he’s afraid’ or psychologically it makes me feel more secure,” Cech told the Mail.

“They have no idea what my surgeon said. They have no knowledge of brain injuries. If I needed help psychologically, I’d wear an American football helmet.”

The sight of the 6ft 5in star wearing a large black rugby-style helmet became somewhat of a trademark for one of the finest goalkeepers these shores have ever seen – his story made all the more remarkable by his determination to recover and return to the top.