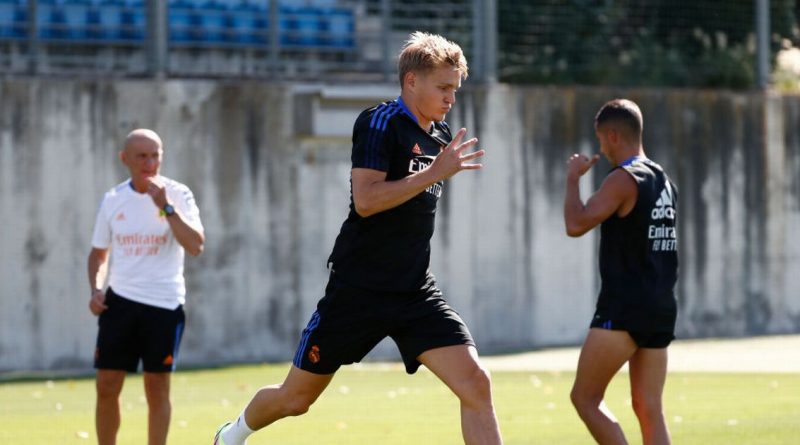 Real Madrid have reportedly ‘closed the door’ on a potential exit for Martin Odegaard this summer.

The Norwegian spent the second half of last season at Arsenal, enjoying an impressive run of performances during his loan spell.

Mikel Arteta has previously admitted he would like the 22-year-old back in his squad for the upcoming campaign as they look to close the gap on the top-four.

Speaking at the start of the summer, Arteta said: “We have a very clear and strong opinion on what we would like to do. He’s not our player.

“We’ll have discussions in the next few weeks, but first of all we need to respect that he’s a Real Madrid player. We’ll have those communications.

Martin Odegaard looks set to stay at Real Madrid, according to reports

“We’ve tried to make everything that we could to get Martin performing for the team, which I think he’s done, and he has adapted really well to our way of playing and to our football club.

“Hopefully we have given him the hope and the feeling that this could be a good place for him.”

Since then there have been conflicting reports over Madrid’s plans for the midfielder, with the appointment of Carlo Ancelotti muddying the water even further.

His predecessor Zinedine Zidane appeared to deem him surplus to requirements, while the Italian could yet offer him a route to regular football at the Bernabeu.

And Toni Kroos’ recent injury means that Odegaard will definitely not be allowed to leave the club, with the chances of him starting games now more likely.

AS claim that the exit doors for Odegaard and fellow ex-Arsenal loanee Dani Ceballos have been closed thanks to Kroos’ injury issues.

Odegaard impressed for Arsenal during the second half of last campaign
(

Arsenal remain in the market for a more attacking midfielder after landing their centre-back in the shape of £50m Ben White.

Albert Sambi Lokonga and Nuno Tavares have also arrived, but Arteta and technical director Edu know more arrivals will need to come in before the window closes.

Leicester City star James Maddison is firmly on their radar amid reports that the Gunners have launched an audacious swap deal.

The Foxes value Maddison at £60m and manager Brendan Rodgers has moved to dismiss speculation that he could move to the Emirates.

“I haven’t been told anything. He’s just become a father so has a responsibility off the pitch,” Rodgers explained. “There is gossip that goes around. James is a very important member of our squad.

“He was disrupted last season with injury so hopefully he can show the top player he is.”