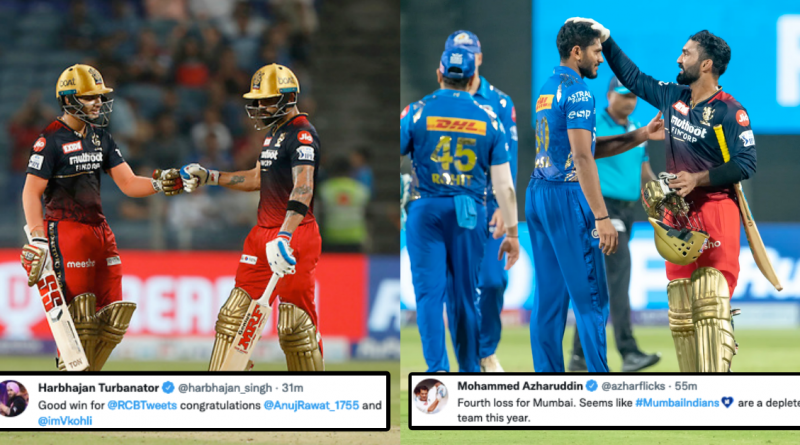 
Royal Challengers Bangalore (RCB) cantered along to their 3rd win in the IPL 2022 season as they defeated Mumbai Indians (MI) in their game at the MCA Stadium in Pune on Saturday.

Bangalore needed 152 to secure their 3rd victory and they managed to achieve it in the 19th over. Anuj Rawat scored his first fifty of the league and put RCB in the driver’s seat during the chase.

Virat Kohli also got back into form and although he was ruled out by a controversial decision, it didn’t matter in the end as Bangalore chased it with 7 wickets to spare.

Earlier, Mumbai got off to a good start with a 50-run partnership but they collapsed from 50/0 to 62/5 within a matter of overs. Rohit Sharma played well but he got dismissed after a good start.

Suryakumar Yadav and Jaydev Unadkat stitched a 72-run partnership for the 7th wicket that propelled the target to a competitive total of 151. However, it was nowhere close to enough for a Bangalore team that is in form.

With the win, RCB moved to 3rd place on the points table as they have 3 wins in 4 matches. As for Mumbai, they are yet to win a game and they now have four losses in four matches, their second-worst start to a season.

Fourth loss for Mumbai. Seems like #MumbaiIndians are a depleted team this year. #RCBvsMI #TATAIPL2022

Congratulations to @RCBTweets for winning by seven wickets. This season RCB is doing better @IPL #TATAIPL

Mumbai stays loyal to CSK at bottom of the points table as RCB denies them a point. Congratulations to Anuj Rawat for a memorable knock. He is going to cherish this chase with a forever chase master Kohli – a dream of every rising talent. #IPL2022 #TATA2022 pic.twitter.com/ffcb42n4Jm

Rohit: “We had gotten off to a 50-run partnership, but I got out at the wrong time. That hurt us a little bit.”#OneFamily #दिलखोलके #MumbaiIndians #RCBvMI #TATAIPL

The way Dinesh Karthik pulled Bumrah for a Six in the last over showed how good he is against pace.

The most-awaited 50 may not have come today but Virat looked so sharp in the run chase, brilliant batting @imVkohli 👏👏 #RCBvMI #IPL2022

It was gutsy to step out against Bumrah. Shows the mind of younger generation. Well played Anuj Rawat. #RCBvMI

Also Read – PBKS vs GT: “This Guy Can Lead A Side” – Ravi Shastri Impressed With Hardik Pandya’s Captaincy Credentials For Gujarat Titans