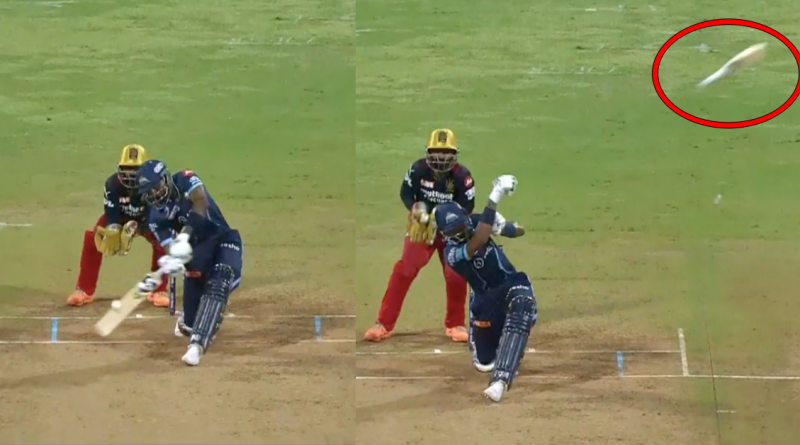 
Gujarat Titans (GT) batter Hardik Pandya lost his bat trying to hit Glenn Maxwell out of the ground when they clashed with Royal Challengers Bangalore (RCB) in the 67th match of the IPL 2022 at the Wankhede Stadium in Mumbai.

GT captain Hardik Pandya won the toss and chose to bat first. They lost Shubman Gill early thanks to an excellent catch by Maxwell at slips. Then Matthew Wade walked in to join Wriddhiman Saha who was in good touch and made 16 in 13 balls with 2 fours and one six to his name.

Then Matthew Wade showed some good hitting abilities, stroking 2 fours and 1 six in his 13-ball 16-run knock before he was adjudged LBW by the on-field and TV umpires despite DRS replays showing a faint edge to the ball before it hit the pads.

This brought in Hardik Pandya onto the crease and he scored runs at a decent strike rate but during the 10th over, he decided to slog-sweep Glenn Maxwell and in the process, lost the grip of his bat which went flying to square leg.

As Hardik had a look at his gloves, the bat was retrieved by the leg umpire and Pandya walked towards him to get his bat back and called for a change of gloves.

GT has already qualified for the first qualifier of the IPL 2022 and Royal Challengers Bangalore needs to win this encounter to remain in contention for the playoffs. However, their fate will also lie in the hands of the Mumbai Indians (MI) and Delhi Capitals (DC) match on Saturday.

As if DC wins the match, they go through to the final four on a better net run rate than RCB, but if MI wins, and RCB defeats GT, then RCB qualifies for the final four.

Also Read: RCB vs GT: Watch – Virat Kohli Consoles Dejected Matthew Wade After He Is Given Out LBW In A Controversial DRS Decision

Here is the video of Hardik Pandya losing his bat: