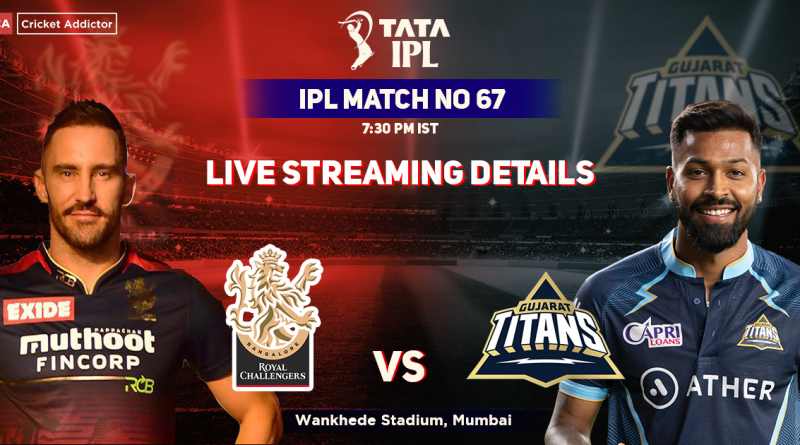 The venue of the clash is Wankhede Stadium in Mumbai. Royal Challengers Bangalore and Gujarat Titans have both played 13 matches so far in IPL 2022. RCB has won 7 games and lost 6. GT has won 10 matches and lost 3. RCB has 14 points and seeks to get an entry into the playoffs. GT has 20 points and has already qualified for playoffs.

Also Read: IPL 2022: When They Lose, They Lose So Horribly That It Becomes A Source Of Regret – Aakash Chopra On RCB’s Defeat Against PBKS

Royal Challengers Bangalore and Gujarat Titans earlier played against each other in IPL 2022 in the 43rd match. In the clash, GT defeated RCB by 6 wickets. RCB batted first in the match and piled up 170-6. Later, with Rahul Tewatia (43*) and David Miller’s (39*) unbeaten knocks, Gujarat Titans chased down the target in the final over.

RCB faced a defeat in their previous match of IPL 2022 against Punjab Kings. Batting first, the Mayank Agarwal-led PBKS posted a gigantic total of 209-9 on the board with stunning knocks by Jonny Bairstow (66) and Liam Livingstone (70). Later, RCB reached 155-9 till the final ball, losing by a huge margin of 54 runs.

Also Read: CSK vs GT: They Are Putting In Performances Which Start To Make You Believe That This Is A Very Good Team – Daniel Vettori On Gujarat Titans

Gujarat Titans defeated Chennai Super Kings in their previous match. Batting first, CSK piled up 133-5 on the board with slow knocks of 53 and 39 by Ruturaj Gaikwad and N Jagadeesan. Later, Wriddhiman Saha scored an unbeaten 67 for Gujarat Titans and grabbed victory for the team by 7 wickets.

Also Read: CSK vs GT: I Hope That I Can Have A Chat With Him Today- Rahul Tewatia Reveals He Has Never Spoken To MS Dhoni Ahead Of IPL 2022 Match Against CSK

RCB vs GT Live Streaming Details- When And Where To Watch Royal Challengers Bangalore vs Gujarat Titans Live In Your Country? IPL 2022 Match 67

Fans can watch the online live streaming of the match on the Disney+ Hotstar app. However, viewers need a premium subscription to watch the matches live on the app.

In African regions including countries like South Africa and Zimbabwe, the match will be telecast on SuperSports Cricket.

In the United Kingdom (UK)

Sky Sports will present the live telecast of the match in the United Kingdom.

In the Caribbean islands, Flow Sports will telecast the match. The live streaming will be available on the Flow Sports app.

In the United States

The match will be available to watch on Willow TV in countries like the United States and Canada.

In Australia, Fox Sports (Fox Cricket) will present the live-action of the match.

In New Zealand, Sky Sport (Sky Sports Cricket) will present the live-action of the match.