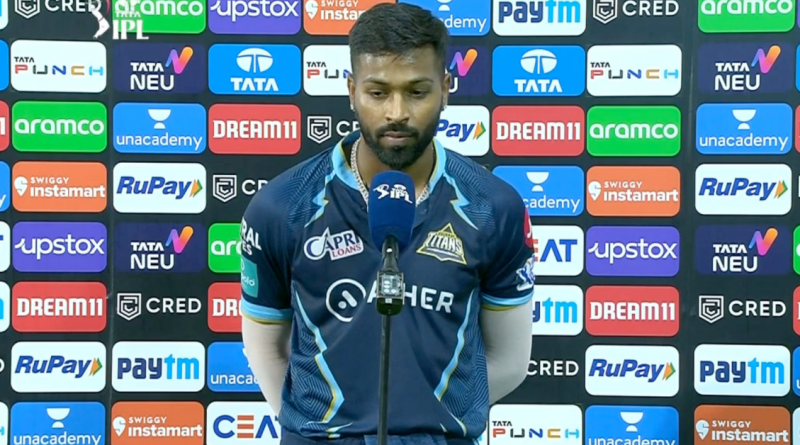 
Gujarat Titans had already qualified for Qualifier 1 which is to be played on May 24th. They didn’t have much to gain from this game apart from being looking to continue the winning momentum. But unfortunately, they lost to Royal Challengers Bangalore by 8 wickets.

Despite that Hardik Pandya wasn’t too upset with the loss.

We Do Not Want To Lose Back-to-Back Wickets Batting First: Hardik Pandya

Earlier in the day Hardik Pandya won the toss and chose to bat first. Hardik had hinted after their last game that some new players might get a chance but GT made just 1 change as they brought in Lockie Ferguson in place of Alzarri Joseph.

They didn’t start well with the bat as they lost two wickets in the powerplay. Wriddhiman Saha was looking good once again but he got run out. Hardik Pandya and David Miller brought the innings back on track and a little cameo in the end by Rashid Khan pushed GT’s score to 168 runs. GT despite bowling well in the powerplay couldn’t get a breakthrough. In fact, RCB had a 100+ opening stand as Virat Kohli scored his 2nd fifty against GT this season.

In the end, GT lost the game courtesy of brilliant innings by Glenn Maxwell.

Hardik Pandya after the game said, “We had just a par score. The ball was stopping here and there and we were happy with 168.”

Lockie Ferguson did not even bowl two full overs on which Pandya said, “We wanted to give Lockie the opportunity, but the wicket was holding a bit. So we wanted to go for bowlers who bowled slower ones and took pace off the ball. We pulled things back in the middle but the way Maxwell played, in the end, made us feel we were 10 runs short.”

On being asked what the team has learned through this game, he said, “We are on the right track and we just need to look after losing back to back wickets. The learning is to make sure we don’t do it in the playoffs. It is always good to score runs. The way the boys are gelling and the way we are going, it is a learning for the players.”

Hardik would hope that GT do not slip up in Qualifier 1 on 24th May.

Also Read: RCB vs GT: Watch – Virat Kohli Celebrates His Luck After Inside Edge Goes For A Four Instead Of Hitting His Stumps