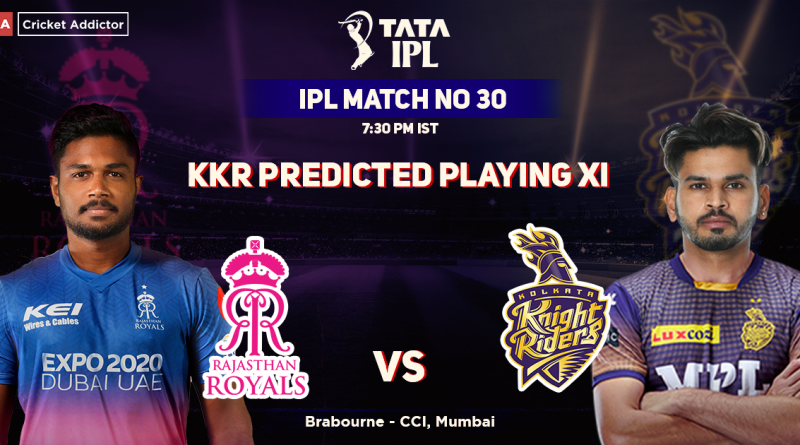 Rajasthan Royals and Kolkata Knight Riders will be eager to get a move on in the IPL 2022 points table with a win when they face each other on Monday (April 18). Both RR and KKR have 6 points each and right now they are battling the mid-tournament log jam and would require a solid run to keep their play-off berth hopes intact.

Kolkata Knight Riders have lost two matches in a row. Venkatesh Iyer, their star in the UAE leg of IPL 2021, is having a jaded IPL 2022 and they need some runs from him. Similarly, the KKR doesn’t have a solid wicketkeeper-batsman too as Sheldon Jackson and Sam Billings have not contributed much with the bat.

Sanju Samson-led Rajasthan Royals (RR) sustained a defeat in its last encounter against Gujarat Titans. RR’s middle order was utterly exposed by Gujarat’s bowlers and defeated them by 37 runs.  Meanwhile, Kolkata Knight Riders (KKR) have also been beaten twice in its last two matches. Shreyas Iyer-led KKR hasn’t been able to keep their performance high as they did during the start of the tournament.

KKR will have to sort out its opening issue. They have tried to go with Ajinkya Rahane, which didn’t work for them. Aaron Finch replaced him, however, his inconsistency would be another issue to tackle. Venkatesh Iyer, on the other side, is also not looking in good touch so far.

Rajasthan Royals is currently placed at the 4th Position on the Points table of Tata IPL 2022. RR has played 5 matches this season and won 3 Matches among them and lost 2 Matches. RR has currently 6 Points.  KKR has also played 6 matches and won 3 and lost 3. Currently, Kolkata is placed at 6th position with 6 points in the points table of Tata IPL 2022.

KKR openers Venkatesh Iyer and Aaron Finch missed out in the last game against Hyderabad and the pair would need to play a solid hand in the match against Rajasthan. KKR skipper Shreyas Iyer has to lead the charge in the middle order with Nitish Rana and Sunil Narine.

The side would be happy to see Andre Russell back in form and he needs to deliver big hits down the order with keeper Sheldon Jackson and pacer all-rounder Pat Cummins.

It is the bowling attack that has an important role to play in this game. Umesh Yadav has looked good, but the side would desperately need Pat Cummins to come up with a better show as he has been too expensive. Varun Chakravarthy isn’t in the best of form and the side needs him to strike form.

Kolkata Knight Riders signed Aaron Finch as a replacement for England batter Alex Hales for the IPL 2022. Aaron Finch who is Australia’s maiden ICC T20 World Cup-winning captain in 2021, has thus far played 88 T20Is and has scored 2686 runs with the help of 2 hundred and 15 half-centuries.

Aaron Finch, who has played 87 IPL games and has over 2000 IPL runs, joined KKR at the price of INR 1.5 crore. When it comes to IPL, Aaron Finch is no stranger having played for eight other franchises since his IPL debut in 2010. He debuted for KKR against Hyderabad but scored only 7 runs. He may be given another chance.