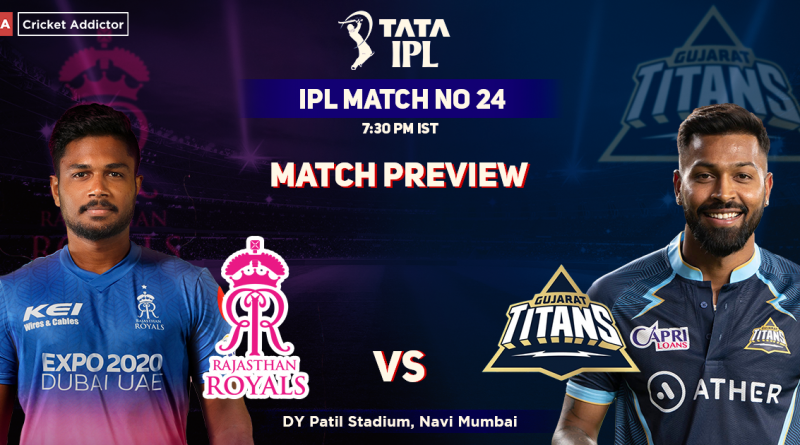 Gujarat Titans and Rajasthan Royals will come face to face in a potentially explosive IPL 2022 match on Thursday (April 14). These teams will have clear intentions coming into the match too. The Gujarat Titans tasted their first defeat of the IPL 2022 at the hands of SunRisers Hyderabad and they are stuck at 6 points.

In theory, Royal Challengers Bangalore (6 points) can go ahead of them and Punjab Kings (4 points) can catch up with Gujarat Titans if those two teams won their next matches. Gujarat Titans under Hardik Pandya would like to avoid that situation and a win over Rajasthan Royals can give them that cushion back.

Similarly, Rajasthan Royals also have 6 points and will be wary of RCB taking the top spot with 8 points if they win or PBKS catching them with 6 points, depending on the result. So, the RR under Sanju Samson too will be eager for that two points of comfort.

Rajasthan Royals were one of the teams that had no availability issues right from the word go. They have all their overseas players intact barring Kiwi pacer Nathan Coulter Nile who is ruled out of the ongoing tournament due to an injury. He played the first 2 games of the season.

Rajasthan Royals, since then has gone in with just 6 pure batsmen which haven’t backfired so far mainly because of the kind of form Shimron Hetmyer is in at the moment. The southpaw from the West Indies has aced all the difficult situations so far. He is one of the reasons for Rajasthan Royals being at the top of the table after the first four games.

Rajasthan Royals also could have won the game against RCB had their captain Sanju Samson been smart enough to bowl the wrist spinner in Yuzvendra Chahal at Dinesh Karthik straight up instead of feeding him with filthy pacers. RR would need their skipper Sanju Samson to get some big scores and not waste his start which, he is doing right throughout the season so far.

In their last match against LSG, having lost their fourth toss in four matches, Rajasthan Royals found a way to defend successfully for the third time in a highly tactical game. They promoted Ravichandran Ashwin to No. 6 in the 10th over only for him to declare himself out in the 19th over to allow Riyan Parag hitting time in the middle.

Lucknow Super Giants were not to be left behind: they promoted Krishnappa Gowtham and Jason Holder as two wickets fell in the first over to make sure their main batters were not exposed to Trent Boult’s swing. Shimron Hetmyer top-scored with an unbeaten 59 while Yuzvendra Chahal had the best figures of 4/41.

Unlike the India international Prasidh Krishna, who attempted yorkers in the 19th and conceded 19 to Marcus Stoinis – incidentally held back for just this role – Kuldeep Sen bowled length and wide outside off to bowl three dots to make it 14 needed off two. The four and six off the final two balls didn’t matter. RR won the game by a mere 3 runs.

Talking about the team, there are also no injury concerns on the side and they aren’t expected to make changes. Young Sai Sudarshan scored only 11 runs but is expected to retain his place in the team, which means Vijay Shankar will keep warming the bench.

Abhinav Manohar also played a brutal knock against SRH and hence is also expected to retain his spot. The Hardik Pandya-led side is not likely to make any changes to their combination. They seem to have found their balance and are likely to retain the young players in the playing XI.

In their last match against SunRisers Hyderabad, they lost the match by 8 wickets. After starting the season with successive defeats, Sunrisers Hyderabad turned it around with back-to-back victories. Two days after swamping Chennai Super Kings, the SunRisers Hyderabad attack turned up once again, this time to consign Gujarat Titans to their first loss.

SRH skipper Kane Williamson notched up a 42-ball fifty. Kane Williamson holed out for 57 off 46 balls, with SRH needing 34 off 23 balls, but Nicholas Pooran closed out the game with a flurry of boundaries along with Aiden Markram. Abhishek Sharma too contributed with 42.