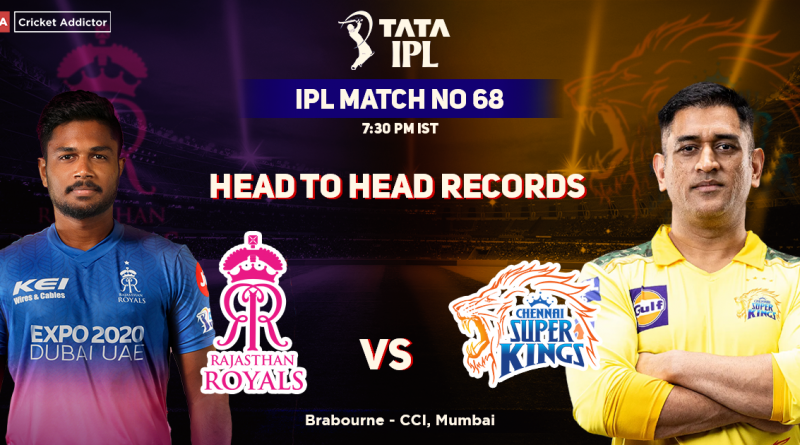 The defending IPL 2021 champions have had a nightmarish season and come here with a big loss against the Gujarat Titans in their last game. Rajasthan Royals on the other hand defeated the Lucknow Super Giants in the last game and have moved to the 2nd place on the points table.

Rajasthan Royals batsmen Jos Buttler and Sanju Samson have made close to 1000 runs between them this season. CSK has failed to do well as a unit and has won just 4 out of the 13 games the side has played this season. Rajasthan Royals spin bowler Yuzvendra Chahal is the leading wicket-taker this season and has already grabbed 24 wickets.

Chennai Super Kings’ openers Devon Conway and Ruturaj Gaikwad haven’t been consistent, and this has hurt the side’s performance. They will have to set up a good show at the start of the innings. Moeen Ali, N Jagadeesan, and Shivam Dube must play important knocks in the middle order as their failure to convert has been a big issue for the team. MS Dhoni and Mitchell Santner will have to do the heavy lifting towards the end of the innings.

Pacer Mukesh Choudhary has done well for the side this season and he must get them early wickets sharing the new ball with Simarjeet Singh. Mitchell Santner and Moeen Ali will enjoy these conditions and they must put pressure on Rajasthan’s powerful batting line-up. The side would also expect tight bowling from Matheesha Pathirana and Prashant Solanki in this game.

Rajasthan Royals opener Jos Buttler has been the best batsman in the tournament, and he would look to set up a good opening wicket stand with Yashasvi Jaiswal. Sanju Samson has stood like a rock in the middle order, and he would look to anchor the innings with Devdutt Padikkal and Riyan Parag. James Neesham and Ravichandran Ashwin can strike the ball hard and they would look for the boundaries in the final overs.

Trent Boult and Prasidh Krishna did well with the new ball in the last game and this is good news for the team as they had struggled previously. Yuzvendra Chahal has been a tough nut to crack for the batsmen and the side would like to see him excel in this game. Obed McCoy did well on his return to the side and he would look to check the flow of runs in the middle overs along with Ravichandran Ashwin who brings lots of experience to this attack.

The return of Shimron Hetmyer will further boost their chances of beating Chennai. Shimron Hetmyer, who became a father for the first time recently, is back in the Rajasthan bubble and is set to replace Jimmy Neesham in the fixture against Chennai Super Kings. Shimron Hetmyer missed RR’s games against Delhi Capitals and Lucknow Super Giants.

CSK on the other hand has already been knocked out of the competition and is languishing at the second last place with only 4 victories from 13 matches. The controversy around former skipper injured Ravindra Jadeja, followed by the Ambati Rayudu retirement U-turn, shows that all is not well for them.

In IPL history so far, both teams have clashed in 25 games of which 15 matches have been won by Chennai Super Kings, while Rajasthan Royals have won 10 games. Both the sides won a match each in last year’s edition. Shane Watson has scored the most runs (679) in the matches played between both teams. He is followed by CSK’s Suresh Raina (630), skipper MS Dhoni (495), openers Murali Vijay (316), and Faf du Plessis (295).

In the overall record, Shane Watson is at the top spot but he played for both sides during different phases of his IPL career. As per as bowlers are concerned, CSK spinner Ravindra Jadeja has picked up the most wickets (17) followed by CSK pacers Albie Morkel (14) and Dwayne Bravo (13).

Murali Vijay (127), Shane Watson (106), and Ruturaj Gaikwad (101*) have scored tons in meetings between the two sides. Incidentally, all of the trio has played for CSK.

CSK and RR last met in the 47th match of IPL 2021 in Abu Dhabi. In a high-scoring encounter, CSK batted first and scored 189/4 courtesy of a brilliant unbeaten century from Ruturaj Gaikwad. He scored 101* off 60 balls with the help of nine fours and five sixes. RR chased down the total in 17.3 overs thanks to half-centuries from Yashasvi Jaiswal and Shivam Dube as the team won the match by seven wickets.