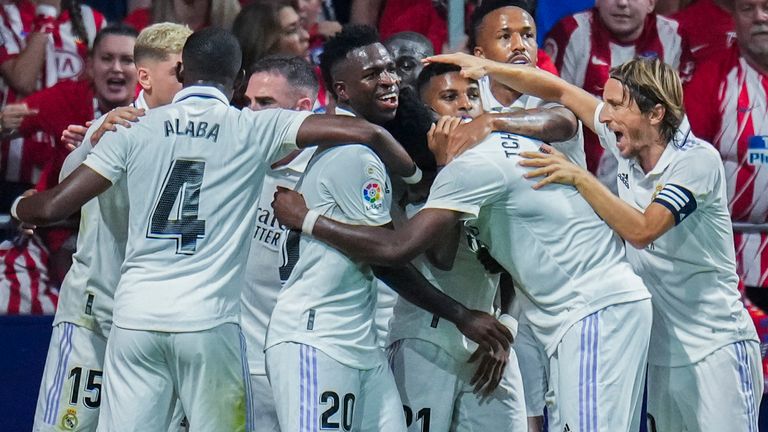 
Real Madrid extended their perfect start to the La Liga season when they beat city rivals Atletico at the Metropolitano, but racist chanting directed at Vinicius Jr outside the stadium marred the derby.

Atletico fans were filmed racially abusing Real’s Brazilian forward Vinicius ahead of Sunday’s game, which the visitors went on to win 2-1.

After the match, Atletico said on Twitter: “Support Atleti with passion and respect for opponents.”

The incident follows comments from the head of the Spanish Football Agents Association, Pedro Bravo, who was criticised last week for saying Vinicius needed to stop “monkeying around” when celebrating goals, with a number of Brazilian footballers, including Neymar and Dani Alves, denouncing his remark as racist.

Bravo said the comment was not intended to be interpreted as racist, and instead was just a common turn of phrase used in Spanish.

Vinicius and Real, however, both released statements condemning the racist abuse the player has suffered during his career.

Vinicius and Rodrygo celebrated Real’s opening goal in the game by dancing in front of the Atletico fans as Real continued their winning start to the season.

Vinicius posted a picture on Instagram with the caption “Dance where you want”, while his international team-mate Gabriel Jesus of Arsenal said earlier on Sunday that his dancing celebration for his goal against Brentford in the Premier League was dedicated to his friend.

Goals from Rodrygo and Federico Valverde put Real in a commanding position against their rivals. Mario Hermoso pulled a goal back for the hosts late on but they were unable to find an equaliser, with the defender sent off in injury time.

Victory means Real return to the top of the LaLiga table on 18 points from six games, two ahead of Barcelona in second. Atleti are seventh, eight points behind their neighbours.

Monza earned a surprising but deserved 1-0 home win over Juventus – their first Serie A victory of the season – as the visitors struggled after being reduced to 10 men.

Angel Di Maria’s return from injury was cut short after being sent off five minutes before the break after placing his elbow in Armando Izzo’s chest.

Juventus had half-chances in the first half but newly-promoted Monza smelled blood in the second half and pressured the opposition defence to make mistakes, while Massimiliano Allegri’s side tried to look for possibilities of a counter-attack.

Substitute Christian Gytkjaer became the hero when he slid in the winner from Patrick Ciurria’s cross in the 74th minute.

Roma coach Jose Mourinho will miss the match against his former club Inter after being sent off in a 1-0 defeat to Atalanta.

Mourinho was shown a red card in the 57th minute after going onto the field to remonstrate with referee Daniele Chiffi, who had awarded a free-kick to Atalanta rather than what Mourinho thought should have been a penalty for his side.

Mourinho became even more infuriated and had to be held back by a member of his staff.

Teenage defender Giorgio Scalvini scored the only goal of the match at the Stadio Olimpico, firing into the bottom right corner in the 35th minute.

Udinese continued their strong start to the season as they recorded their fifth straight win, beating Inter Milan 3-1.

Nicolo Barella curled in a fantastic free-kick in the fifth minute to get Inter off to the perfect start but Udinese leveled when Roberto Pereyra’s free-kick went in off Milan Skriniar.

Udinese hit the post before Jaka Bijol headed in a corner with three minutes remaining and Tolgay Arslan made sure of the points in stoppage time with a diving header.

A brilliant header by Napoli striker Giovanni Simeone helped his side to seal a 2-1 win at AC Milan and return to the top of the Serie A table.

Simeone headed home in the 78th minute almost from the edge of the six-yard box following a superb Mario Rui cross.

Winger Matteo Politano had scored a penalty in the 55th minute following a foul by Sergino Dest on Khvicha Kvaratskhelia.

Olivier Giroud fired in an equaliser in the 69th minute from Theo Hernandez’s cross.

Paris Saint-Germain opened a two-point lead at the top of Ligue 1 after Lionel Messi’s early goal earned the French champions a 1-0 win at Lyon.

Messi scored his fourth league goal of the season in the fifth minute to put Christophe Galtier’s side on 22 points from eight games.

Lyon, who have now lost their last three matches, are sixth on 13 points.

Jordan Pefok and Sheraldo Becker scored again on Sunday to fire Union Berlin back to the top of the Bundesliga with a 2-0 win over Wolfsburg.

Becker set up Pefok to open the scoring in the 55th minute, then the Suriname forward raced clear to seal the win later on, giving Union a two-point lead over Borussia Dortmund after seven games.