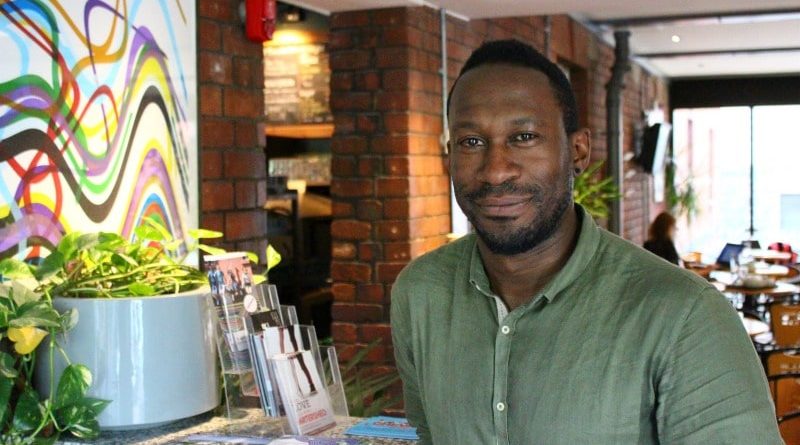 David Ellington is a Bristol-based actor in film, theatre, and TV drama.

He has been working with cultural arts centre Watershed for many years to help it be as welcome, inclusive and accessible to as many people as possible, and writes for PinkNews about the fight for inclusion for Black, Deaf, queer people.

When I came out in the late 90s, the first film I saw that really impacted me was 1996’s Beautiful Thing. I then gradually watched more gay feature films, shorts, and TV dramas like Queer as Folk, God’s Own Country, and most recently, It’s A Sin. While they are all interesting, culturally important and thought-provoking, it was clear to me, as with all of the films and TV series I watch, representation of my identity and culture as a Black, Deaf gay man was missing.

As a professional actor and performer, I have been involved in the film, TV, and theatre industries for many years. In this time, I’ve seen some examples of real progress in Deaf representation on screen, but very little for those of us who also identify as Black and LGBTQIA+. I recently watched Audible on Netflix. It was an extraordinarily moving documentary about Maryland School for the Deaf high school athlete, Amaree McKenstry, and his close friends during their senior year. It follows the discrimination and personal challenges they have had to overcome including the suicide of a close friend, after being subjected to terrible bullying and struggling with confusion around his identity, family and friends. Although it was great to see this story on screen – the majority of the main characters are Black – as is so often the case, it was produced by a white hearing director. Although one of the executive producers is Deaf actor and activist Nyle DiMarco, I’d rather see a Black, gay, director in that position, no matter Deaf or hearing.

However, I was moved when I recently saw What If, Teresa Garretty’s short film, that appeared on screen last year. It was fantastic to see actor Christopher Laing’s debut as a Black, Deaf, gay, British Sign Language (BSL) user. I saw myself, someone like me represented in queer cinema. It’s a great start to expanding our understanding of inclusion on screen, particularly in queer cinema. But it is not enough.

One of the most obvious barriers is that parts simply aren’t being written. It’s been years since I have heard of any new Black, Deaf, queer writers, but thankfully, in recent years some are beginning to emerge which I’m hoping will soon result in better representation and roles for people like us.

However, if the opportunities aren’t being created for us, we must create them for ourselves. A few years ago, I wrote and directed a film called Liberty based on a poem I had written in response to the dangerous and provocative situations that all queer people of colour have to face. It was an experimental work, and I chose to present it using a style called Visual Vernacular, (commonly shortened to VV), a theatrical art form using physical expression to tell a story with strong body movements, iconic BSL signs, gestures, and facial expressions.

It contains elements of poetry and mime and has become popular as it allows the Deaf performer to communicate a narrative without saying a word – and my objective for Liberty was to create something universal.

It’s from this place Deaf Conversations about Cinema was born, Watershed’s monthly film discussion event for Deaf and hearing audience members, which I host. The project was initially set up in January 2016 after a successful six-month residence as an “Agent for Change” funded by Arts Council England (South West). Watershed’s aim is to develop a more inclusive cinema that welcomes Deaf people so that we too can enjoy the experience and be able to chat about films.

This has led to Watershed’s website being adapted so that Deaf people can read “what’s on” in plain text or watch BSL video clips. Watershed’s calendar page was rearranged to include accessibility filters such as AD (audio described) and DS (descriptive subtitles), highlighted in specific colours to signify which accessible language was available for a screening. It’s a huge step in the right direction. During Pride, Watershed held its annual Queer Vision Film Festival and presented a diverse programme of new release LGBTQIA+ films from around the globe, including independently-made features and award-winning short films as part of Bristol Pride Festival and supported these by making them accessible to Deaf audiences.

I’m incredibly proud of what we’ve achieved in terms of bringing awareness to Black LGBTQIA+ and Deaf narratives. I hope it inspires all parts of the film industry to expand its understanding of what inclusion and diversity really means.

Watershed’s Deaf Conversations About Cinema series, hosted by David, will start again in the autumn.