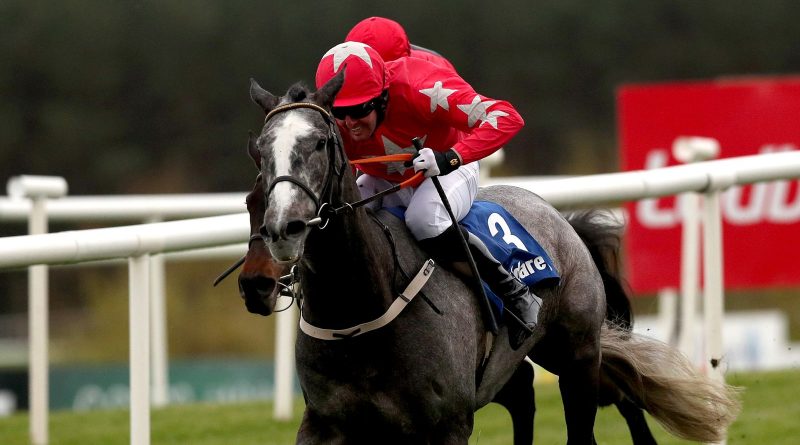 Connections of Dunvegan are considering the possibility of swerving the Grand Annual Chase at the Cheltenham Festival in favour of at tilt at the Queen Mother Champion Chase.

The Pat Fahy-trained eight-year-old produced a faultless jumping performance in the hands of Bryan Cooper to land a valuable handicap over two miles and a furlong at Fairyhouse last weekend.

The nine-year-old grey’s three-and-a-quarter-length staying-on success over the Willie Mullins-trained Blackbow made it back-to-back wins at the track and owners George Turner and the Clipper Logistics Group are dreaming big.

While Dunvegan holds an entry in the Ladbrokes Dublin Chase, Fahy says the ultimate goal is the Cheltenham Festival.

He said: “It was an unbelievable performance – that is the only way you can describe that.

“We have him in the Dublin Racing Festival. We will see what the ground is. If it comes up good, which it can do, that will be an option.

“We will have a chat with Joe Foley, Steve Parkin and George Turner and see what they would like to do.

“It wouldn’t bother me if he didn’t have run between now and Cheltenham. We have his measure now and I think we can get him there in top form.

“The Grand Annual is an option, of course. Maybe that is the race, I don’t know. The entries haven’t closed yet.

“He is rated 156 now and he would probably have to give a lot of weight in the Grand Annual. We are not panicking at the moment. We are really enjoying that win.”

Dunvegan’s jumping is a major asset and Fahy feels the horse has the right temperament for the hullabaloo of a big festival meeting.

“So, no, I wouldn’t be ruling out the Queen Mother. I would just love to see the horse run in it.

“It may be a way better option going for the Grand Annual, but I don’t see why he should not be in the Queen Mother. He would be a joy to watch in that. He has done us no harm and we’ll be able to enjoy him.

“Everything from here is jam on top and we shall hopefully see you at Cheltenham.”