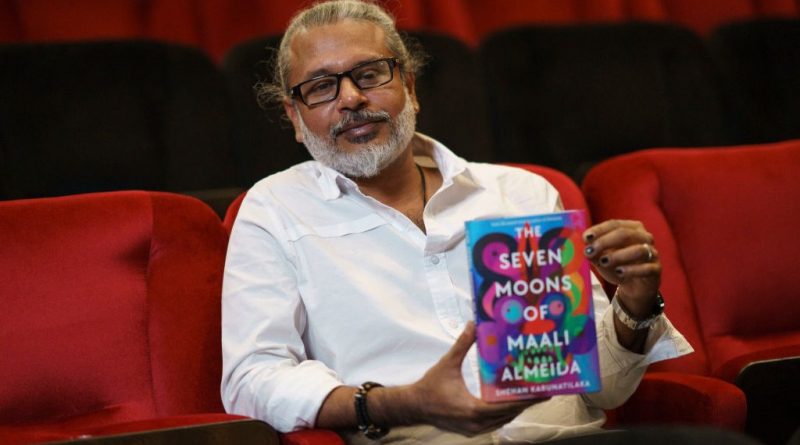 
When Shehan Karunatilaka got the call from his ecstatic agents that his second novel, The Seven Moons of Maali Almeida, had been longlisted for the Booker Prize, he was grateful but didn’t dwell on it too much.

Karunatilaka, a Sri Lankan writer living in Colombo, had more pressing concerns at the time. He was taking his children to school while his wife was waiting in a four-day line for gas; a harsh reality of day-to-day life during Sri Lanka’s worst economic crisis in seven decades. The country of 22 million is grappling with food, fuel, and medicine shortages due to the government’s financial mismanagement and the aftermath of the COVID-19 pandemic, which badly hurt the tourism sector. Inflation is now running above 50%, the country has run out of foreign currency, and is unable to pay for essential imports.

His winning novel unfolds as a murder mystery, where the protagonist Maali Almeida, a recently deceased war photographer, wakes up as a ghost and has seven days to identify his killer. The story takes place in the late 1980s, during the early years of Sri Lanka’s devastating 1983-2009 civil war that pitted the Sinhalese-led Sri Lankan government against the separatist Tamil Tigers.

Karunatilaka spoke with TIME about the unexpected win and how Sri Lanka’s brutal civil war relates to present-day political struggle and economic hardship.

What have the last 48 hours looked like for you?

My phone’s just been going bing, bing, bing all night long. It’s been a lot of outpouring of love, so that’s great. It’s been obviously lots of interviews and photos but I got some sleep last night and sleep is a big cure for everything. And I finally called my mom, my agent, and my kids.

You made the longlist in July, at that point what did you think of your chances of winning?

It had been a long road to writing Seven Moons and finding a U.K. publisher so I was quite happy about [the longlist]. But, obviously, Sri Lanka was imploding. In July, we had the big Aragalaya [“struggle” in Sinhalese], the President left, and so on.

When you write a book it’s not like a movie premiere where it comes out and it’s big, it comes out slowly, and then hopefully, it finds an audience. But then I realized, “wow, this is going to get [more attention] now” because the world is focused on Sri Lanka. Then it made the shortlist and you’re like, “Okay, well, the party continues.” In a writing life, you’ve got to brace yourself for most disappointments. The night was quite nerve-wracking; you’re expecting to toast to someone else and go home, and then your book gets called out. It’s been quite surreal.

What was your starting point for Seven Moons?

The end of the civil war, in 2009. For an entire lifetime, that’s all we’d known. We thought the war would continue forever. But there was debate over what happened, in the final stages, to the 40,000 civilians who were killed. I thought, let the dead speak because the living doesn’t have a clue. That was my starting point.

How did you bring Maali Almeida to life on the page?

I did base him on Richard de Zoysa who was murdered in 1990. He was from Colombo, a middle-class, English-speaking activist whose murder still hasn’t been solved. But then Maali evolved into a war photographer and a gambler. What they both had in common is they were both closeted gay men––that was the only type of gay man you got in 1989, in Sri Lanka.

He was also working for all sides. He took photographs of the Tamil Tigers, the Sri Lankan army, and the Marxists. Through him, I can talk about the different factions in Sri Lankan politics at the time and also create a murder mystery, because any one of these people could have wanted him killed.

Read More: Why Sri Lanka’s Protests Will Continue Under a New President

You’ve previously spoken about self-censoring some of your stories, how does the political climate affect the work of yourself and other writers?

We’re always wary in Sri Lanka. We’re having a moment of freedom of expression, with people on the street shouting everything they can about the ruling party and slaying them with jokes on the internet. But that wasn’t always the case.

Ten years earlier it was a very different climate. Lasantha Wickrematunge, the iconic editor of the Sunday Leader [the nation’s subversive weekly English-language newspaper] was gunned down in broad daylight. There was a culture of “don’t say this, don’t write that, or the white van will come and get you.” And this was a reality. Journalists would go missing.

What does daily life look like with Sri Lanka’s current economic crisis and how does this relate to the civil war?

The war ended in 2009. And though there were unhealed wounds, one side clearly won [the Tamil Tigers were defeated by the Sri Lankan Armed Forces in May 2009].

Suddenly, investment started coming in, highways were built, and so there was a facade of infrastructure and prosperity for a while. But we’ve had successive governments, inept governments, who have mismanaged funds and borrowed without thinking of consequences. Add to that we’ve had the pandemic and a loss of tourism, which was the main income for so many Sri Lankans.

I don’t know if the current crisis relates to the civil war. But now daily life is quite grim—so grim that people were taking to the streets because they don’t have gas to cook with. I’m fortunate, I sit in a room as a freelance writer, but I can see from the vast majority of the country that their livelihoods depend on getting gas and commuting. There are some people who will absolutely be pushed into poverty.

In July, then-President Rajapaksa was forced to step down amid protests. Did this represent a turning point for Sri Lanka?

We hope it’s a turning point. The current President, Ranil Wickremesinghe, was famously not elected and was parachuted in [lawmakers hand-picked Wickremesinghe as a successor to Gotabaya Rajapaksa, after he was forced out of office by protestors and fled to the Maldives before returning in September]. Many people believe he’s the best of the bad lot but these are all men in their 70s and 80s, some older, who have presided over all our successive messes.

When the Rajapaksa family was in power, it was unthinkable that we, the populace, could get so loud that we could remove a President, a Finance Minister, and the Prime Minister. That happened very slowly, over three months, so it was a tremendous moment. Now we need to see what was gained from it. Are we now going to proceed forward with a vision? Are politicians still going to pocket the money that’s coming in? Are we going to run the state properly?

We’ve had so many absent leaders, and I’ve lived through most of them, so I’m wary about being too hopeful. But I hope that something is done about that before it escalates further.

What do you hope the lasting legacy of this novel is?

I hope that it will be filed under fantasy and that it’s still in print because you can’t take these things for granted. Twenty years from now, if we’re still in the same place, that will be quite tragic for me. I’m writing magical books with ghosts and demons and people are saying, “Yeah, that’s exactly what Sri Lanka’s like right now.” I want it to be next to Harry Potter and Lord of the Rings in the library. That sounds like a fantasy in itself, but that’s what I hope for. That we learn from our stories.

The book also says quite explicitly, that I’m disappointed that we don’t think of ourselves as Sri Lankans first and foremost. We’re still at some level thinking of ourselves as Sinhalese Buddhist or Tamil or Muslim. It’s such a simple idea, that we’re all Sri Lankans who come from different backgrounds, maybe speak different languages, and believe in different things. If we can grasp that, that would be my hope for the book.