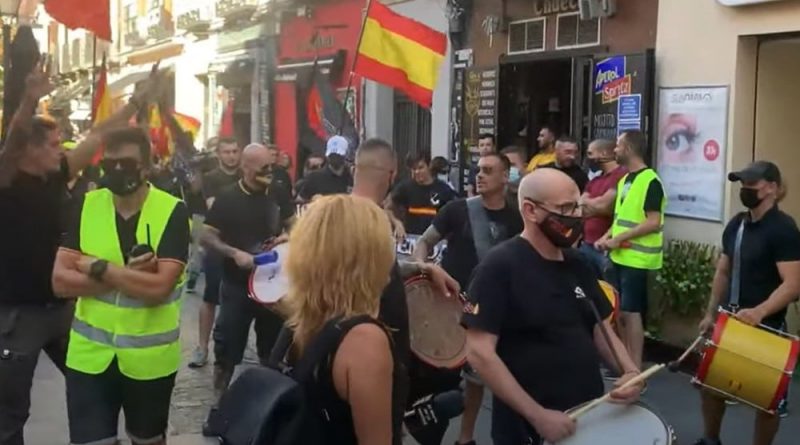 Protesters carrying drums march through the streets of Madrid (Twitter/@SoyMmadrigal)

The Madrid prosecutor’s office is investigating after hundreds of people with Nazi paraphernalia marched through the Spanish capital chanting homophobic slurs.

On Saturday (18 September) around 200 protestors gathered in Madrid’s LGBT-friendly area of Chueca, known for being the centre of Spain’s annual Pride celebrations.

The crowd was heard shouting “get f**s out of our neighbourhood” and “get those sidosos [a slur for people living with AIDS] out of Madrid” as they marched with drums toward the Puerta del Sol square, escorted by riot police and several National Police vans.

Several protesters wore T-shirts and tattoos of fascist and Nazi symbols, set off flares and some made the Nazi salute, witnesses told Reuters.

Others waved Spanish flags and symbols of Juventud Nacional, an organisation linked to the far-right party España 2000, calling for a “Christian and non-Muslim Spain”.

Regional prosecutors confirmed on Monday (20 September) that they had launched a hate crime investigation following a request from equality minister Irene Montero, who called the march “homophobic and racist”.

It was also condemned by Madrid’s deputy mayor Begoña Villacís, who tweeted: “If Chueca is free, if Madrid is free, it is because we are not the least concerned about those who choose to come out of the closet, but those who, lately, have decided to get out of the cave.”

One person has already been arrested for “assaulting another protester,” according to Madrid City Hall spokesperson Inmaculada Sanz.

The march was organised by the San Blas-Canillejas Association, who told authorities it would be devoted to the “Say No to the 2030-2050 Agenda,” El Pais reports.

The 2030-2050 Agenda refers to the government’s planned reforms in education, healthcare, taxes, jobs, pensions and the environment, but as the protestors began chanting “Out with queers” and “Here are the fascists,” it became abundantly clear the focus was not on sustainable development.

The flare of anti-LGBT+ sentiment comes months after the horrific killing of Samuel Luiz, a 24-year-old gay man whose shocking murder in July sparked international outrage.

The Spanish government promised this month it would create specialised groups within the Interior Ministry and the police force to prevent hate crimes and support victims.