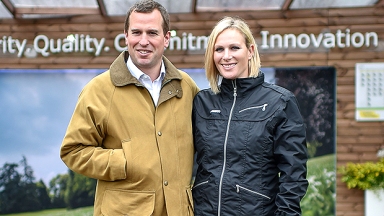 
Queen Elizabeth II, who died on Sept. 8, 2022, was the United Kingdom’s monarch for 70 years, and left an indelible mark on Buckingham Palace, including four children in the line of succession that she welcomed with husband Prince Philip, who died in 2021 at age 99. Those four royals — Charles, Anne, Andrew and Edward — bestowed their parents with six grandchildren: Prince William, Prince Harry, Peter Phillips, Zara Tindall, Princess Beatrice, Princess Eugenie, Lady Louise Windsor, and James, Viscount Severn.

While many fans of the royal family know all about William and Harry, their cousins are left out of the spotlight at times. Keep reading to find out more about two of the Queen’s other grandkids, Zara Tindall and Peter Phillips, below.

On May 15, 1981, Princess Anne and Mark welcomed Zara, the Queen’s eldest granddaughter. Like her brother, Peter Phillips, Zara does not hold a royal title. “I’m very lucky that both my parents decided to not use the title and we grew up and did all the things that gave us the opportunity to do,” she told The Times in 2015.

Zara was known to be a bit of a wild child, even getting her tongue pierced in her 20s. Despite all the headline-making shenanigans, Zara was able to focus on her equestrian career. She competed in the 2012 Olympics for the British equestrian team on her horse, High Kingdom. In the team event, she won a silver medal, which was presented to her by her mom!

Before marrying rugby star Mike Tindall, she had a long and scandalous relationship with jocky Richard Johnson. She and Richard had a very public and physical spat once and also posed for an eyebrow-raising photo shoot together for Hello magazine. She would go on to wed Mike in 2011 and welcome three children together: two daughters Mia and Lena and son Lucas.

Where Will Queen Elizabeth Be Buried? Everything To Know About Monarch’s Final Resting Place

Born to Princess Anne and Mark Phillips on November 15, 1977, Peter is Queen Elizabeth II’s eldest grandchild. Like his sister Zara, Peter is not considered a working royal, although he is officially 18th in line for the throne. He has worked for several high-profile companies, Jaguar, Williams F1 racing team, the Royal Bank of Scotland, and recently SEL UK, a sports and entertainment agency.

He has two daughters with his ex-wife Autumn Phillips: Savannah and Isla. The former couple were separated in 2019 and finalized their divorce in 2021 after 13 years of marriage. Following the split, Peter began dating Lindsay Wallace, with whom he made his official debut as a couple at the Epsom Derby in June 2022.

Peter is known to be close to his cousins Prince William and Prince Harry, with whom he had many playdates as a child, When their mother, Princess Diana, died, Peter was right by the boys’ sides durin their mourning. He has even been rumored to be the one family member who may be able to reconcile the two brothers!