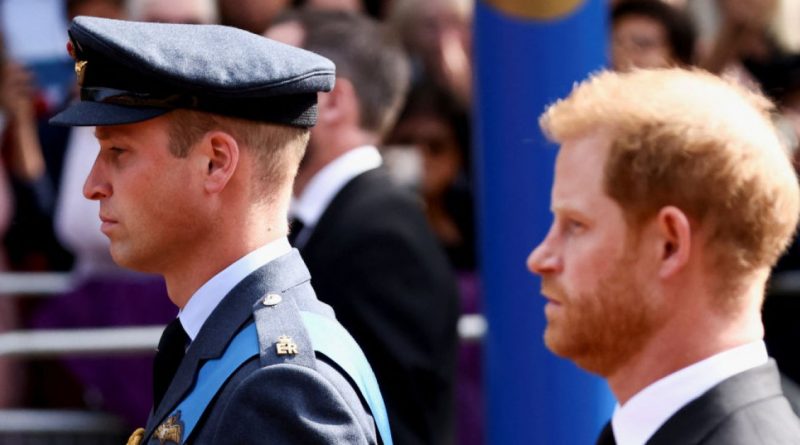 
After estranged British Prince Harry and his brother Prince William appeared together after their grandmother’s death last September, it may have seemed like the feuding royals would put the worst of their differences behind them. Not so fast.

In a shocking new revelation, Harry has alleged that William once physically attacked him over the former’s marriage to Meghan Markle, according to the Guardian, which obtained a prerelease copy of Harry’s forthcoming memoir in which the incident is reportedly detailed. The allegation represents the latest dramatic twist in the yearslong saga of the couple’s acrimonious split from Buckingham Palace.

The Guardian reported on Thursday that a passage in Spare, which publishes Jan. 10, asserts that in 2019 William showed up at Harry’s home in London and “knocked” the younger prince to the floor during a heated conversation.

The book, believed by royal watchers to be a juicy tell-all of Harry and Meghan’s dealings with the House of Windsor, has been kept closely under wraps by publisher Penguin Random House before it’s set for worldwide release next week.

Since their public stepback from royal duties in 2020, the Duke and Duchess of Sussex have spoken out on their struggles within the so-called Firm, including dealing with mental health woes, British media vitriol, and alleged racism within the monarchy’s circles. The Palace has steadfastly refused to comment on the couple’s claims.

Here’s what to know about the newest allegation Harry has brought to light.

How does Harry describe what happened in London in 2019?

Based on Harry’s account, as reported by the Guardian, he and his brother had an argument in Nottingham Cottage, in the grounds of Kensington Palace. William had come over “piping hot” to talk about Harry’s “whole rolling catastrophe” of his relationship with Meghan, as well as their issues with the British press, which has been critical of their marriage.

William allegedly called Meghan “difficult,” “rude,” and “abrasive,” to which Harry replied that his older brother was parroting false media narratives. Harry accused his brother of “acting like an heir,” and the two exchanged insults.

According to the account, William claimed he was only trying to help, to which Harry then replied: “Are you serious? Help me? Sorry – is that what you call this? Helping me?”

That remark purportedly angered William, so Harry went to the kitchen to get him a glass of water. William, tailing his younger brother, set down the water and then “came at [Harry].”

“It all happened so fast. So very fast,” Harry reportedly writes in his memoir. “He grabbed me by the collar, ripping my necklace, and he knocked me to the floor. I landed on the dog’s bowl, which cracked under my back, the pieces cutting into me. I lay there for a moment, dazed, then got to my feet and told him to get out.”

Harry reportedly writes that William urged him to hit back, but he refused. According to the telling, William left the cottage though he returned shortly after to apologize; then he left again but not before saying that Harry did not “need to tell Meg about this”—referring to the altercation.

Meghan is said to have later discovered the “scrapes and bruises” on Harry’s back, which prompted him to disclose the fraternal fight to her.

What to know about Harry’s memoir, Spare

The book’s title references the concept of a firstborn royal child being in line to inherit the throne, while subsequent children represent merely backups should something happen to the eldest. In the U.K., William, who is 40, was born the “heir,” while Harry, who is 38, has thus always been a “spare.”

According to the Guardian, Harry’s resentment of this second-tier status “is the unifying theme of his book, through chapters on his childhood, his schooling, his career as a royal and in the British army, his relationship with his parents and brother and his life with Meghan through courtship, wedding and marriage to their own experience of parenthood.”

Proceeds from Spare’s sales will go to British charities, according to the publisher’s website.

How is Harry promoting the book? What else has he said?

The Duke of Sussex did two TV interviews in the lead-up to the book’s release: one with British broadcaster iTV, the other with news program 60 Minutes on CBS. Both interviews are set to air Sunday.

In a snippet of the iTV interview, Harry told British journalist Tom Bradby, “I would like to get my father back. I would like to have my brother back,” referring to King Charles III and William. “They’ve shown absolutely no willingness to reconcile,” he said. “They feel as though it’s better to keep us somehow as the villains.”

In a clip from his upcoming 60 Minutes interview with Anderson Cooper, Harry says he and his wife would have liked to live a private life since they moved to Canada and then California, but he accuses Buckingham Palace of planting disparaging stories against them. “There becomes a point when silence is betrayal.”

The interviews come on the heels of the December release of a six-part documentary series by and about Harry and Meghan on Netflix. The show, which set the record for Netflix’s most-viewed documentary premiere, highlights the rift between Harry and his family, particularly William. “The saddest part of it was this wedge created between myself and my brother,” Harry says in one episode, “so that he’s now on the institution’s side, and part of that I get. I understand—that’s his inheritance.”

Though Harry may have been destined to be the spare, however, with his words and the stories he’s decided to reveal, he’s proven to be anything but.