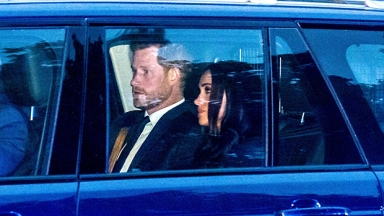 
Prince Harry, 37, and Meghan Markle, 41, joined other royal family members to receive Queen Elizabeth II‘s coffin as it arrived at Buckingham Palace in London, England on Sept. 13. The Duke and Duchess of Sussex were photographed sitting in a car as they set out to join King Charles III, his wife Camilla, the Queen Consort, and more for the somber moment, which happened after the coffin departed RAF Northolt Airforce Station in Ruislip. They were dressed in black as they continue the 10-day period of mourning for the longest-reigning monarch in British history.

The sighting came shortly after Prince Harry publicly broke his silence about his grandmother’s passing at the age of 96 on his Archewell Foundation social media page. “In celebrating the life of my grandmother, Her Majesty The Queen — and in mourning her loss — we are all reminded of the guiding compass she was to so many in her commitment to service and duty,” he wrote in the sentimental post. “She was globally admired and respected throughout her life and now her everlasting legacy. Let us echo the words she spoke after the passing of her husband Prince Philip, words which can bring comfort to all of us now: ‘Life, of course, consists of final partings as well as first meetings.’”

“Granny, while this final parting brings us great sadness, I am forever grateful for all of our first meetings—from my earliest childhood memories with you, to meeting you for the first time as my Commander-in-Chief, to the first moment you met my darling wife and hugged your beloved great-grandchildren,” he sweetly continued. “I cherish these times shared with you, and the many other special moments in between. You are already sorely missed, not just by us, but by the world over.”

Before Prince Harry, who arrived in Scotland shortly after the Queen’s passing, shared his latest message, he and Meghan posted a tribute of the Queen on the homepage of their Archewell website. “In Loving Memory of Her Majesty Queen Elizabeth II,” it read along with her birth year and death year. It also included a happy black and white photo of the Queen and Prince Harry looking at each other and smiling.