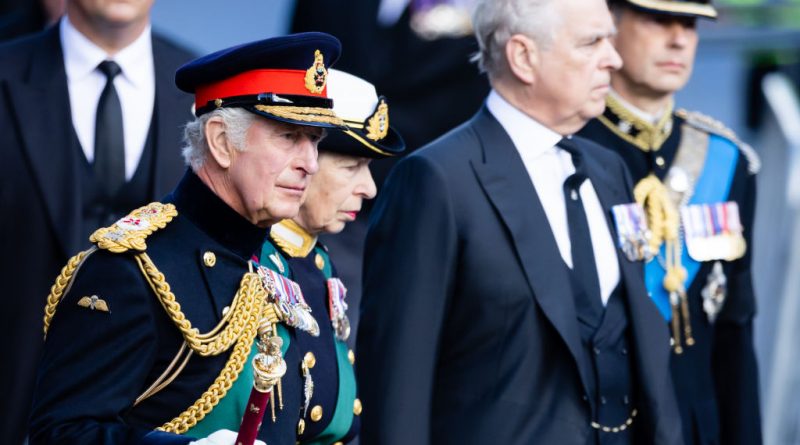 
A heckler’s arrest in Scotland Monday afternoon has thrust an estranged Prince Andrew back into public view, and cast an awkward shadow on the royal family as it mourns the death of Queen Elizabeth II.

The heckler called Prince Andrew a “sick old man” as the disgraced royal walked behind the Queen’s coffin during a solemn procession to St. Giles Cathedral in the Scottish capital Edinburgh.

The appearance was one of the rare public sightings of Andrew since his fall from grace over his friendship with convicted sex offender the late Jeffrey Epstein. Earlier this year, Prince Andrew settled out of court in a civil case brought by Virginia Guiffre, a victim of Epstein’s sex trafficking ring when she was 17. She had accused Andrew of sexual assault and battery.

Andrew may have joined his siblings last Thursday at the Queen’s Scottish summer residence Balmoral, as they gathered at her bedside before she passed away. But the royal family is keen to draw as little attention to him as possible, says Giselle Bastin, an associate professor and a British royalty expert at Flinders University in Adelaide, Australia.

The palace revoked Prince Andrew’s military titles and royal patronage last January, in the wake of Guiffre’s assault allegations. This meant that at the Edinburgh procession, he was the only child of the Queen in civilian attire. King Charles III, Princess Anne, and Prince Edward all wore military uniform.

Prince Andrew will be allowed to wear a uniform at the Queen’s final vigil at Westminster Hall but not at the funeral on Sept. 19 or any other proceedings. (The Queen’s grandson Harry, who renounced his royal title and duties in 2020, must also wear civilian clothes at the funeral.)

This marks a departure from the way in which the Queen protected the image of her second son during the last months of her reign.

At Prince Philip’s funeral in March 2021, the Queen reportedly ordered no military uniforms to be worn to avoid embarrassment for Prince Andrew. He was also given visibility during the memorial at Westminster Abbey, escorting his mother in and out of the church—a prominence widely noted in the British press.

According to conservative U.K. broadsheet the Telegraph, Andrew reportedly talked to the Queen in June about reinstating his royal status. He also wants his daughters, Princesses Beatrice and Eugenie, to become working royals.

King Charles III will now have to decide whether to fund his disgraced brother. After leaving the Royal Navy in 2002, Prince Andrew has not had any full-time paid job, although he acted as the U.K.’s special representative for international trade for 10 years and has been receiving a £20,000 ($23,000) annual pension.

When Prince Andrew was a working royal, he made as much as £250,000 ($292,000) yearly. His reinstatement would run counter to King Charles III’s long-reported inclination towards paring back the royal family to only a few key members to save on cost.

At the Queen’s Platinum Jubilee, she was flanked only by working royals during her appearance at the Buckingham Palace balcony—a stark contrast to the scene 20 years prior. Prince Andrew was not there due to a coronavirus infection.

“Who we saw at the final balcony appearance of Queen Elizabeth II, during her Jubilee, will be what we see going forward [without her],” says Bastin.