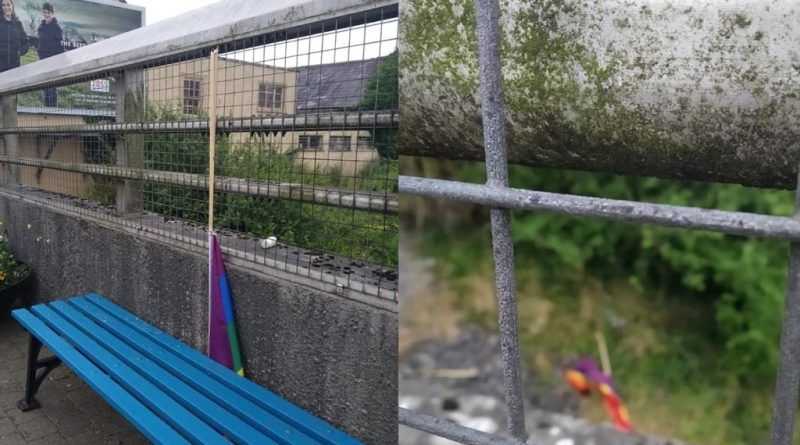 Pictures of the Pride flags that were destroyed in Claremorris, Mayo. (OutWest)

Pride flags have been torn down and vandalised in a “disgusting” act of hate in a small town in the west of Ireland.

The flags were put up in Claremorris, Mayo, on Sunday (25 July) to show support for the local LGBT+ community – but they were torn down and the flag poles broken that night.

OutWest, an LGBT+ community group that works with queer people in the west of Ireland, said they were “profoundly saddened” to learn the Pride flags had been torn down.

“This is sad, disheartening, and disgusting that this is happening,” the group wrote on Facebook.

OutWest told PinkNews that they contacted police “straight away” after discovering that the flags had been torn down.

“This is a wrongful and horrific act as the rainbow flag is not just a flag to us, it’s a symbol representing the whole LGBT+ community,” an OutWest spokesperson said.

“If this was to happen to a national flag of a country, it would probably make mainstream news straight away, but this isn’t always the case for the Pride flag and the LGBT+ community.”

OutWest is calling on members of the local community to show their support for the LGBT+ community by putting Pride flags up in their windows in Claremorris.

The group has also said it will be donating funds to the community to ensure the flags and poles that were destroyed by vandals can be replaced.

A second Pride flag was destroyed in a separate incident

A Pride flag was also destroyed in Sligo, in Ireland’s north-west, in a separate incident last weekend. The flag had been erected at the Penny Café in the town to mark Sligo Pride, but it was left in tatters shortly afterwards.

The act of vandalism was condemned by Nigel Gallagher, a local People Before Profit candidate.

“Bigotry like this has no place in Sligo or indeed anywhere,” Gallagher wrote on Facebook. “People who engage in this kind of stuff are certainly in the minority but they are becoming more emboldened.

“The far-right has grown over the past number of years and they have also exploited the fear and uncertainty surrounding the pandemic.”

The latest incidents come after Pride flags were torn down and burned in Waterford and Carlow in Ireland’s south-east.

There was national outrage in June when Pride flags were set alight during the night in Waterford in June. The flags were replaced, but they were cut down for a second time in an act of anti-LGBT+ hate.

Speaking at the time, Damien Geoghegan, mayor of Waterford, insisted that they would keep raising the Pride flags every time they were targeted by homophobic vandals.

Shortly afterwards, a Pride flag that was erected outside a café in the town of Ballon, Carlow, was set on fire during the night.