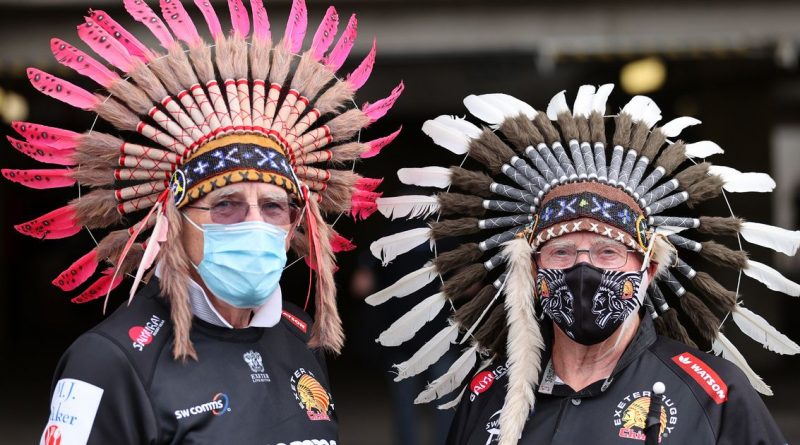 English rugby is on the verge of civil war breaking out over a debate that’s left at least one Premiership outfit grasping for advice on how to tackle the matter.

The divide in question could see many Exeter Chiefs fans pitted against the rest of the league over their freedom to wear faux Native American headdresses.

The debate itself is nothing new as Exeter have encountered criticism for cultural appropriation in recent years, with many encouraging the club to rebrand and move on from the ‘Chiefs’ moniker it adopted in 1999.

Exeter announced in July 2020 that the board had decided to retire the ‘Big Chief’ mascot but would retain their logo and branding despite pressure from supporter groups.

Wasps released a statement on Tuesday, pleading with Premiership Rugby, the Rugby Football Union (RFU) and its new Diversity and Inclusion working group to ensure the issue of fans wearing headdresses “is formally addressed.”

They’ll host Exeter at the Coventry Building Society Arena on Saturday, and Wasps want clear direction after a supporter group wrote an open letter asking the six-time English champions to ban headdresses at the ground in August.

It’s the smarter move to lay the responsibility at the feet of English rugby’s decision-makers, as leaving that decision up to individual clubs would likely only lead to further divisions.

Major League Baseball ‘s Cleveland Indians will soon cut ties with that name at the end of the 2021 season, having been criticised in the past for perpetuating Native American stereotypes.

The NFL ‘s Washington franchise has also made the decision to depart from its ‘Redskins’ name after 87 years using the imagery and were one of the examples cited in Wasps’ recent plea for guidance.

“Many topics and behaviours which were once tolerated, such as cultural appropriation, are no longer acceptable,” the English club wrote in its most recent address.

“Just because something isn’t offensive to you, doesn’t mean it isn’t offensive. Even though we do not want to create a professionally offended society, we do need to recognise that times and opinions change.

Do you think Exeter Chiefs fans should be banned from wearing Native American imagery at games? Let us know in the comments section.

“Since 2020, several sports teams around the world have recognised that the appropriation of another culture is something they can no longer justify.

“Last year there was a public focus on the prominent use of appropriated names and iconography by professional franchises including the Washington Football Team (formerly known as the ‘Redskins’ until July 2020) and in Canada, the Edmonton Eskimos have become the Edmonton Elks.”

While Wasps will not impose their own ban on faux Native American attire, the club did “discourage supporters” from wearing such items and said it would be revisiting the matter at a later date.

Exeter fans have worn headdresses and other Native American-inspired clothing since the 1999 re-brand, although the team was founded some 128 years prior.

The club defended its decision to retain the branding last year after “content provided to the board indicated that the name Chiefs dated back into the early 1900s and had a long history with people in the Devon area.”

England’s RFU has touched on the debate after a spokesperson said: “The governing body encourages all clubs to carefully consider their role in continuing to improve diversity and inclusion.”

However, that stance only encourages the notion that the matter should be handled on a club-by-club basis, which may not be the same approach afforded to other potentially offensive items being worn on matchdays.

Exeter—who won a Premiership and European Champions Cup double in 2020—said the ‘Big Chief’ mascot had been ditched last year as a “mark of respect.”

However, it’s difficult to discern how the decommissioned mascot significantly differs from fans wearing the same attire, aside from the faux tomahawk ‘Big Chief’ would traditionally wield at games.

To their credit, Wasps have listened and responded to the concerns raised by some of their fans in an attempt to come to some form of understanding on the matter.

The spotlight now turns to the RFU and Premiership Rugby in the hope of finding a league-wide resolution moving forward, with England’s powers under pressure amid talk of a potential ban.